Cathay Pacific shares gained 2.4% in Hong Kong trading yesterday. The carrier reported an 8.7% increase in passenger numbers in Nov-2010 to 2.2 million and commented that “demand held up well across the network” in the month.

Cathay Pacific General Manager Revenue Management Tom Owen added: “The Hong Kong market remained robust, and we continued to see good passenger demand on our China routes and within the region. Premium demand saw an increase in revenue quality and volumes across most routes when compared to the same period in 2009.”

Cathay Pacific stock has strengthened 65% in 2010 compared with a 6.7% gain in the benchmark Hang Seng Index. The carrier, the world’s third-largest by market value, expects to more than double profit this year to at least USD1.6 billion.

Meanwhile, Goldman Sachs has removed China Eastern Airlines from its rating of "conviction buy". The investment bank believes that the Nov-2010 operating data of the carrier is likely to decline after the ending of Shanghai World Expo at the end of Oct-2010. The carrier however reported a 40.3% increase in passenger numbers to 5.3 million in Nov-2010 and Goldman Sachs still maintains is “buy” rating on the carrier’s stock.   Shares in the carrier declined 0.3% yesterday.

In mainland trading, shares in Hainan airlines (+2.8%) and Shandong Airlines (+2.5%). China's shares posted their largest one-day gain in two months on Monday as the central bank's latest tightening measure was milder than the market had been expecting, despite a pick-up in inflation in Nov-2010.

Shares in Indian LCC SpiceJet gained 6.7% on Monday, following a share price slump of around 15% in the previous week. 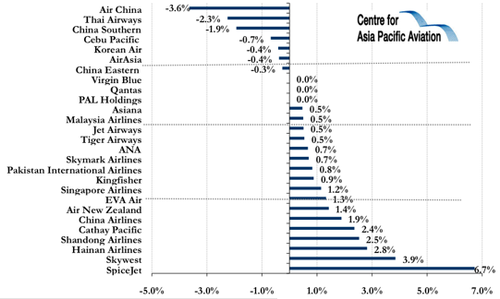