Cathay Pacific’s shares surged 7.8% yesterday as rumours emerged the carrier may have found a buyer for all or some of its 27% stake in Hong Kong Aircraft Engineering Co (HAECO). That Cathay is reported to be preparing to sell the HAECO stake could signal the carrier has cash concerns beyond the end of 2009.

In a recent letter to staff, Cathay CEO, Tony Tyler stated poor yields, weak demand and a negative currency impact was “making it more important than ever to preserve cash”. He added, “if our revenue situation does get worse, then more [action] may be needed”.

Meanwhile, Japan Airlines’ shares rose 0.5% on the eve of the announcement of its revised business plan for this financial year. The carrier, which has offered staff unpaid leave and is reportedly cutting 1,200 jobs by Mar-2010, has applied for a JPY200 billion (USD2 billion) loan from the state-owned Development Bank of Japan. 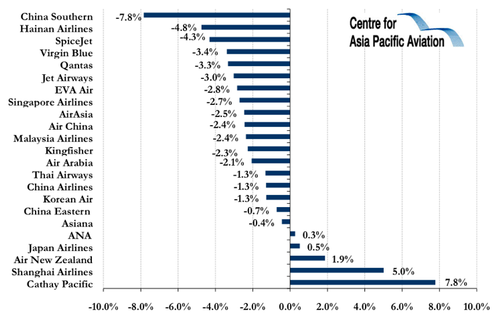