Cathay Pacific CEO Tony Tyler stated the company’s overall expansion plan including the construction of a cargo terminal in Hong Kong would be funded through “traditional methods” of financing. Mr Tyler added that the carrier’s planned bonus package for staff would be funded by profits adding that there is no need to issue new shares to raise funds.

Shares in the carrier closed 3.4% higher at HKD22.80 yesterday, reaching the highest level in more than a month, after the carrier stated its expects to report a full-year profit that will more than double its previous record. The stock, which has surged 57% in 2010 outpacing a 8.3% gain for the benchmark Hang Seng Index, earlier climbed to HKD23.60, the highest level since at least Mar-1990.

On the other end of the spectrum, shares in Skywest slumped 12.2% while Kingfisher Airlines shares were 6.5% weaker yesterday on a day that saw huge selling pressure. Shares in Jet Airways were also weaker, down 3.9%.

Separately, KR Choksey Securities has advised shareholders stay with Jet Airways, commenting: “For shorter-term Jet Airways seems to be on track also from the point of view that the numbers are supporting them mainly the kind of traffic that they have been witnessing is suggesting that it is going to stay here and with the good economic situation most of the aviation companies should record better numbers as far as attracting more amount of seats are concerned and so from that point of view this company looks set for the shorter-term.” 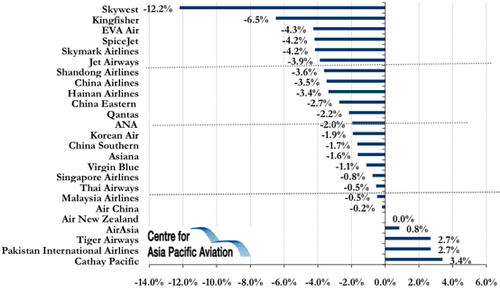