Cathay Pacific Airways shares gained 3.7% yesterday, to reach their highest level in around 22 months on heavy institutional buying. Shares in the carrier have gained more than 45% in 2010 to be easily the best performer on the Hang Seng Index.

He added that the carrier may place orders for six A330F this year to boost its cargo operations, with the carrier planning to launch long-haul passenger services to Paris, London and Sydney in 2011. The carrier is negotiating landing rights for passenger and cargo services to Taipei, to be launched in Nov-2010. Mr Yang said the carrier is expected to break even and post a small profit in 2010, on revenue gains of an estimated 30-40%, adding that revenues may triple in 2011 as it expands capacity.

Also in North Asia, shares in China Southern Airlines gained 3.2%, as the carrier reported double-digit passenger and cargo traffic gains in Aug-2010, and load factor gains across its network. Passenger numbers gained 17% in the month to 7.4 million, with cargo carrier increasing 30% to 98,730 tonnes and average load factors gaining 5.4 ppts to 82.8%.

China Airlines to announce plans to join SkyTeam next week

Also in the region, China Airlines has reportedly agreed to join the SkyTeam Alliance, with the Taipei-based carrier to announce the agreement as early as 14-Sep-2010.

The potential membership would further expand SkyTeam's presence in Southeast Asia, with the alliance already including Korean Air Lines (founding member), China Southern Airlines and Vietnam Airlines (joined in Jun-2010) as members in the region, with China Eastern Airlines also agreeing to join the alliance by the end of 2011. By comparison, oneworld has Japan Airlines, Qantas and Cathay Pacific, and Star Alliance has Air New Zealand, Air China, ANA, Asiana, Shanghai Airlines (although this is to be terminated by the end of Oct-2010), Singapore Airlines and Thai Airways as its Asia Pacific member airlines.

Shares in China Airlines and EVA Air were both weaker yesterday, slipping 4.1% and 5.8% respectively, reflecting weakness in the Taiwan stock market, which closed lower yesterday for the third consecutive session. An improvement is expected today (10-Sep-2010).

In the South Pacific, shares in Qantas gained 0.8% yesterday. On the same day, the International Air Services Commission (IASC) reaffirmed its decision to allow Qantas and South African Airways (SAA) to continue codesharing on routes between Australia and South Africa from 01-Jan-2011 to 31-Dec-2011.

IASC reassessed its decision in Aug-2010 to allow the codeshare to continue after Virgin Blue announced plans to suspend V Australia's Melbourne-Johannesburg route from Feb-2011. In its latest decision, IASC concluded that the public benefits associated with the Qantas/SAA codeshare improved in 2009, ahead of the entry of V Australia on the route, approving the codeshare as a result.

However, the IASC is concerned Qantas and SAA will be tempted, in the absence of V Australia, to allow capacity to become constrained as economic recovery leads to a return to demand growth on the route. To protect against a reduction in capacity, the IASC proposes to include a condition requiring Qantas and SAA to maintain a minimum of 14 services per week between them. This is an increase of two frequencies from the proposed conditions in the Aug-2010 draft decision and an increase of four frequencies from the Commission’s Dec-2008 decision. IASC will also monitor closely the development of traffic levels and capacity plans of Qantas and SAA over the months through to mid-2011 and the pricing behaviour in which they engage through that time. 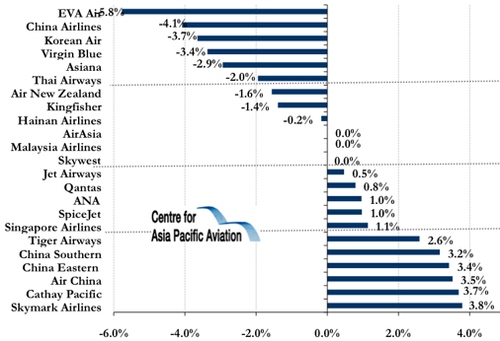