Cathay Pacific stated premium demand remained “firm” in most markets in Mar-2011 although the “slump” in demand in the carrier’s Japanese routes was evident. Outgoing CEO Tony Tyler stated that "in general, the company is in very good shape or there are solid plans in place to put it in very good shape".

However, the carrier in its Mar-2011 CXWorld staff newsletter, noted that the business is again threatened by rising fuel prices which will impact on the airline’s future profitability. Mr Tyler however stated that being a financially strong carrier, Cathay "can afford to do what's necessary to stay ahead of the competition". Mr Tyler also stated that during his time at Cathay Pacific, "I've only seen the first few chapters of the Asian aviation growth story: what's coming next will continue to drive the progress of our group".

Combined Cathay Pacific/Dragonair traffic revealed a slight year-on-year decline in the number of passengers carried. The carriers handled 2.2 million passengers in Mar-2011, a 2.8% year-on-year reduction. This marks the second consecutive month of passenger declines, after a 1.2% fall in Feb-2011. 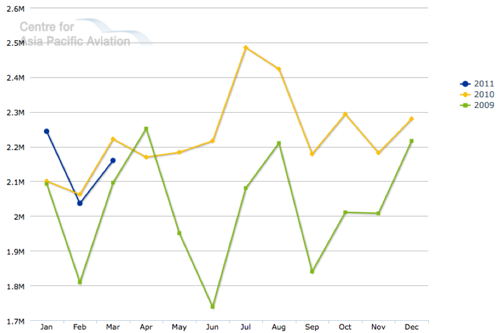 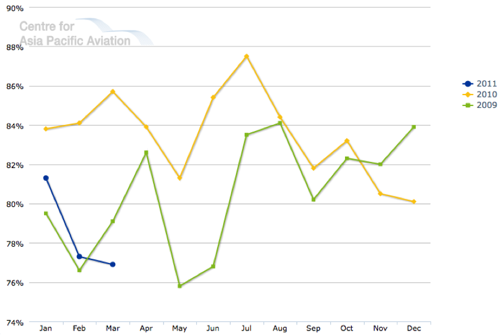 The number of flights operated by the carrier in the month increased 11% to 5316. 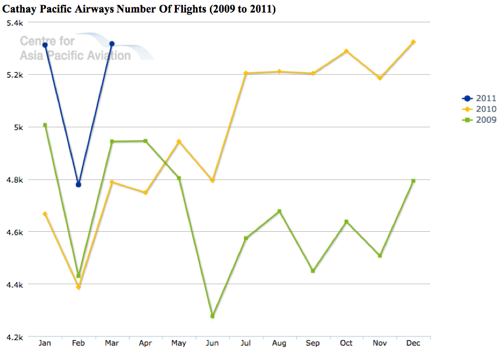 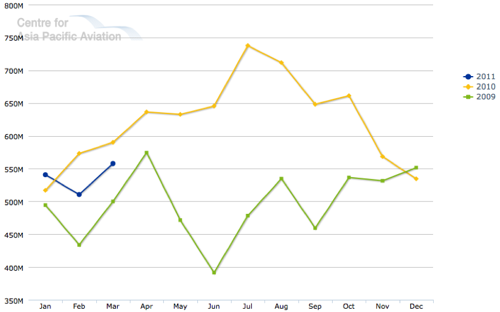 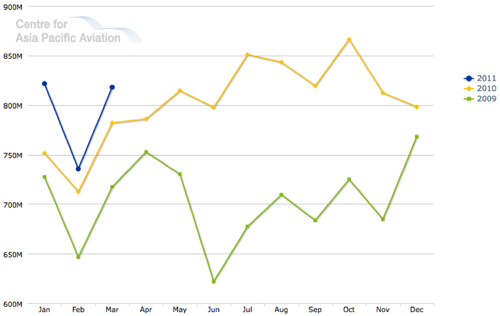 “China markets remain encouragingly strong overall, although we face revenue challenges specifically on the Shanghai routes off a very high base in 2010,” according to General Manager Revenue Management Tom Owen.

Cathay Pacific former COO and incoming CEO John Slosar has similarly stated robust growth in passenger and cargo services in mainland China is expected to provide a boost for the carrier. He added that the rapid growth of international travel from China will probably be the most interesting story of the decade and the airline will take good advantage of the opportunity.

“North American and Southeast Asian markets remained strong, although it was a challenging month for the Economy Class cabins on European and South West Pacific routes, affected to some extent by an Easter seasonality shift as well as heightened competition,” Mr Owen said. Cathay Pacific North America traffic (RPKs) has grown every month over the past two years. 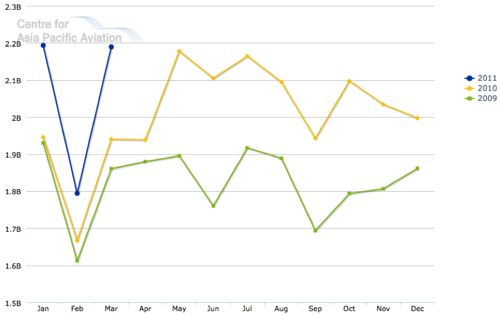 Traffic (RPKs) on North East Asian sectors slumped 11.6% in Mar-2011, as the carrier’s operations were negatively impacted by the 11-Mar-2011 earthquake and tsunami in Japan. Capacity (ASKs) on these routes increased by 18.0% resulting in a big fall in load factors. 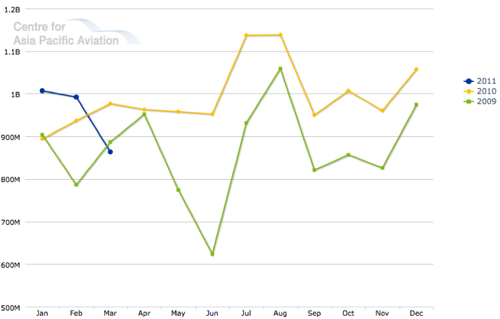 Cathay Pacific stated it expects "several months of weakness with a recovery towards the summer" following the recent events in Japan. Cathay reduced capacity to/from Japan from 01-Apr-2011 to 15-Apr-2011 in response to weakening passenger demand. At present, Cathay Pacific operates seven daily services to and from Tokyo.

In the freight market, the airline's General Manager Cargo Sales & Marketing James Woodrow noted that traffic back into Asia "remained robust during March, the demand from Hong Kong and Shanghai was comparatively soft particularly to Europe. Demand did improve towards the end of the month due to an increase at the end of the quarter. The tragic earthquake in Japan did briefly affect our Japan operation however the Cathay Pacific Japan team worked heroically to get cargo flowing again almost immediately.” 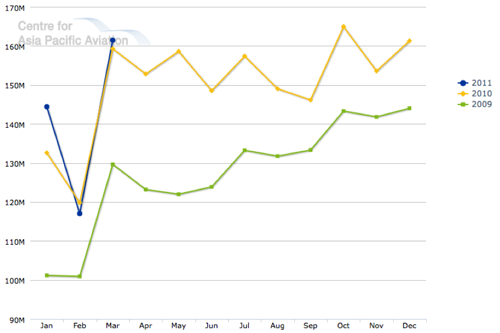 Cathay Pacific increased its stake in Air China from 18.43% to 18.77% in Apr-2011, paying around HKD40 million (USD5.15 million) for 5.48 million shares. Cathay Pacific acquired the Hong Kong-listed (H shares) shares for an average HKD7.348/share. Cathay Pacific stated Air China was a good investment and it would increase its holding in the company. Air China is a substantial shareholder of Cathay, owning nearly 30% as of the end of 2010, after Swire Pacific which held 43% in the Hong Kong-based airline. 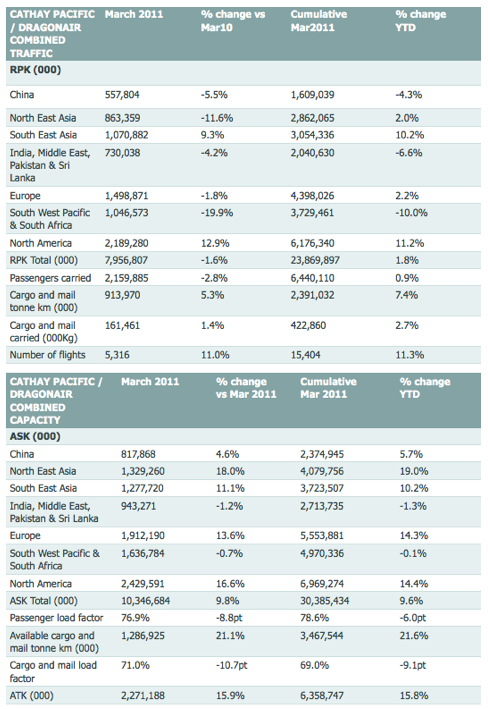