Cathay Pacific and Singapore Airlines. A contrast in styles, but trapped in the same market

Like it or not, the two flag carriers of Asia's best known islands are frequently compared. As the global airline market contracts, their positioning, along with the roles of their respective hubs, offers an interesting contrast - and one that the market has picked up, as shown by their respective share performances in their trading profiles over the past year. 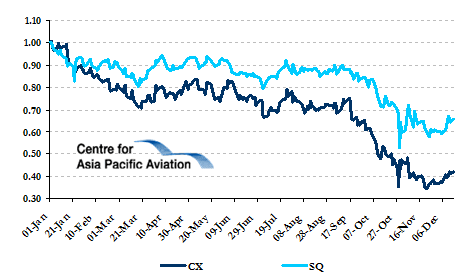 Each airline is a true network operation, progressively over the years developing its home base point to point product also. So, when one part of the system weakens there is often the opportunity to redistribute capacity to better performing markets. Each targets a premium market, as well as carrying a substantial proportion of cargo in its revenue stream.

This time around, as things turn down there are however three new features: one, this downturn is global and there are few if any pockets of hope; secondly, they have ramped up reliance on a premium traffic market which is now slumping to an extent that could not have been imagined a year ago; and thirdly, their reliance on Asian markets has grown significantly, even since the 2003 SARS outbreak.

This latter feature is hurting both carriers. Singapore Airlines, reporting its Nov-08 traffic results today, for example showed a cargo load factor reduction of a whopping 13.1 percentage points for "East Asia" routes. This compares with an overall equivalent fall of 4.2 percentage points for all routes.

Cathay, whose reliance on the Chinese market is greater (but does not break out regional cargo results), shed 15.4 percentage points on cargo loads. Cargo markets are tanking as high value exports decline. As Cathay Pacific General Manager Cargo Sales and Marketing, Titus Diu, said last week, "November is traditionally one of the busiest months in the airfreight business but this year the peak simply didn't happen." 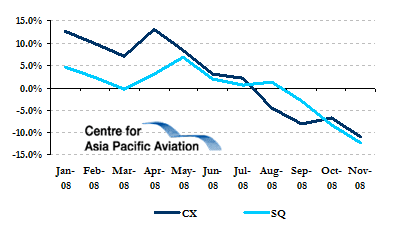 The outlook is not good either for this sector. As IATA reported last week in its global review for 2009, "with 45% of the global cargo market, the (Asia Pacific) region's carriers will be disproportionately impacted by the expected 5% drop in global cargo markets next year." (And, ominously, Director general, Giovanni Bisignani went on, "Air cargo comprises 35% of value of goods traded internationally. The 7.9% decline in October is a clear indication that the worst is yet to come - for airlines and the slowing global economy.")

Capacity expansion is the big difference

But Singapore Airlines has to date been much restrained in its capacity expansion than Cathay and it is here that the difference in performance shows. Cathay is talking of grounding several of its freighters as its greater exposure there has bitten deep already. But the bigger contrast is in capacity growth on the passenger deck that is making a difference.

Cathay went on an order binge over recent years, while Singapore has managed, at least so far, to contain its expansion. For most of 2008, Cathay's passenger capacity levels have been up by around 15% year on year. Singapore has managed to keep its increase down to more manageable levels.

Despite similar numbers of new aircraft seats entering their fleets, Singapore has apparently managed the process better, either grounding or redesigning flight patterns to reduce utilisation. 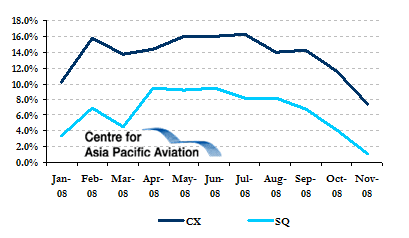 This disparity - and the decline in passenger loads since Asia recognised that it was not "decoupled" from the world's economy - can be seen in the respective load factor showings of the two carriers. In the early part of the year, Cathay was able to maintain load factor increases, despite adding 10% and more of capacity year on year.

But, as the economy deteriorated and Cathay's capacity kept rolling in, this equation quickly changed. Meanwhile, despite its lower expansion of seat numbers, Singapore Airlines' passenger load factors have bumped along in negative territory all year, but are not experiencing the steeper decline of Cathay. 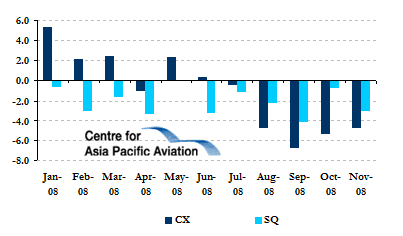 There is one other closely linked variable: yields. Airlines are understandably reluctant to publish any more than local requirements force them to - and even then reports tend to be somewhat opaque.

To some extent, the Asia Pacific market, along with others, has been carried along on the previous year's optimism. Once the new year turns, the indications from forward bookings are that either a lot more capacity will be grounded (unlikely while fuel prices remain low) - or that yields will decline across the board.

Already Qantas has effectively dumped a lot of its first half 2009 premium capacity in the market with its two-for-one offers.

The race to get seats out there first could be on after midnight on 31 December, as a year ends that most will prefer to forget. Hopefully 2009 will be a year to remember, for all the right reasons.