Asian airline shares were mixed on Wednesday (05-Aug-09), reflecting weaker conditions on regional equity markets after reaching 11-month highs earlier this week. Leading the gainers yesterday was Shanghai Airlines, up 5.1%, despite the carrier stating it expects to report a 1H2009 loss due predominantly to cargo volume reductions.

Qantas CEO, Alan Joyce, yesterday described the current economic environment as the “biggest global economic downturn since the Great Depression” adding that the short-term outlook for aviation is “dire”.  However, he expressed confidence that the Qantas Group’s two complementary flying businesses gives the Group the “longevity, scale and strength” to remain strong in the future.

Mr Joyce warned that of the new entrants into the Australian market, “not all will make it. Some may exit, scarred”. Mr Joyce also stated the carrier has no plans for a merger with another carrier within the next decade, believing the “time is absolutely not right'', due to commercial and regulatory barriers. The carrier’s shares rose 0.4% yesterday.

Japan Airlines' shares also gained on Wednesday, up 3.0%, ahead of its 1Q2009 earnings release, scheduled for 07-Aug-09. The carrier is reportedly considering scaling back its passenger flight business by approximately 10% in 2H2009, as part of measures to reduce costs and return to profitability. The majority of route reductions will reportedly occur on international services, while the carrier is reportedly considering downsizing to smaller aircraft on some domestic routes.

Also in North Asia, Hong Kong share prices closed down on Wednesday, dragged down by disappointing first half results from Cathay Pacific. While the carrier posted a 1H2009 net profit of HKD812 million (USD105 million), reversing a net loss of HKD760 million (USD98 million) in the previous corresponding period, the carrier would have been in the red if not for hedging gains of HKD2.1 billion (USD271 million). The carrier reported “significantly reduced” premium demand in the six month period, while economy demand remained “fairly robust”. Passenger yields slumped 19.7% and cargo yield fell 32.8%.

According to Chairman, Christopher Pratt, “the simple truth is that we continue to lose money due to the deep and sustained downturn in our passenger and cargo businesses…The best we can say at the moment is that the worst may now be over...but we still cannot see any clear sign of any sustained pick-up in our core business”.

In the Chinese Mainland, the news was more upbeat, with CAAC Chief, Li Jiaxiang, stated Chinese airlines’ passenger numbers may rise by more than 20% in 2009, after reporting the largest passenger growth rate in the world in 1H2009. CITIC China Securities also stated China’s domestic carrier financial results are likely to “substantially improve” in 3Q2009, as the carriers benefit from lower fuel prices, reduced swine flu concerns and seasonal demand improvements, which are resulting in improved load factor and yield levels. However, leading the decliners on Wednesday was China Eastern, which slumped 5.8%. 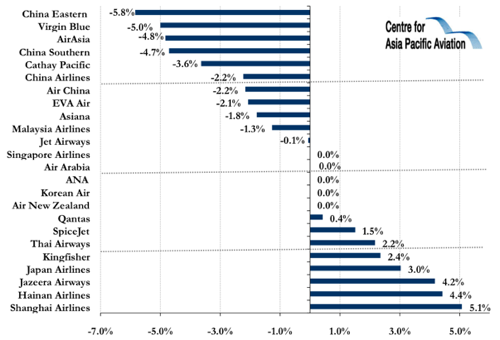