On the occasion of the joint ACI EUROPE & ACI WORLD Annual Assemblies, Congress and Exhibition, which took place in Istanbul early in Jun-2013, Declan Collier, President of ACI EUROPE and newly elected vice-chair of ACI WORLD’s governing board, referred to the main challenges facing European aviation – and airports in particular. The main issue: there is not enough capacity, and funding is one key part of that equation. USD320 billion is currently allocated worldwide (USD70 billion in Europe) - but more is needed.

Meeting a demand for timely and accurate data on airport construction projects, CAPA has released the CAPA Airport Construction & Capital Expenditure Database - part of the new CAPA Airports Data Suite - now available in an online subscription. It tracks construction and capex updates daily and presents detailed information on infrastructure developments at all the world’s commercial airports.

The database may be interrogated in a variety of ways to produce and publish tables and charts which demonstrate how capital expenditure is being made in different regions and countries, and whether it is on existing or new airports and how it is evolving over time.

In his presentation, Mr Collier deplored the fact that, despite recessionary pressures and the weak economic prospects affecting most of Europe, there was little appetite to capitalise on the strategic role aviation can play for growth and jobs, pointing the finger at short-termism, “micro-politics,” the regulatory burden, red tape, bilateralism and “the urge to refill the State coffers” as the forces that continue to pay havoc with the European aviation sector. Few European countries have a thoroughly thought-through and fully formulated aviation policy. “Long-term challenges,” he said, “are being ignored at our peril.”

The recently completed “Challenges of Growth 2013” report from EUROCONTROL shows that despite slower traffic growth prospects in the next 20 years, Europe continues to face a severe airport capacity crunch. The main reason for this capacity crunch lies in the fact that airports have been forced to reduce sharply their capacity expansion plans. Revenue pressures, capital costs, a lack of political support, poor planning processes and decreasing confidence are all colluding to constrain airport development throughout Europe.

Indeed, while back in 2008, airports’ plans provided for a 40% increase in capacity by 2030, these plans have been severely cut back with capacity now expected to increase by just 17% by 2035. This will result in 12% of demand for air transport not being accommodated,due to insufficient airport capacity - or 1.9 million flights per year not being accommodated, with 237 million passengers “unable to fly.”

The most exposed countries in the airport capacity crunch will be Turkey (27%), the United Kingdom (14%), the Netherlands (17%), Bulgaria (22%), Hungary (17%), Germany (11%), Poland (9%) and Italy (8%), but it will have severe repercussions throughout Europe. In particular, delays and congestion will be skyrocketing throughout the aviation network, with average delay per flight rising from current levels of 1 minute per flight to 5-6 minutes per flight.

Mr Collier warned about the harsh consequences of inaction: “The airport capacity crunch isset to cost airlines and airports in excess of EUR40 billion of lost revenues per year by 2035. In addition, you need to add close to EUR5 billion in congestion costs. But ultimately, this is not going to be just about aviation – but about Europe’s global relevance and economic performance. Insufficient airport capacity will cost EUR230 billion in lost GDP to Europe – that is a lot of economic activity and a lot of jobs that we cannot afford to lose.”

Of course it is not only in Europe that such capacity inhibitors are observed; though that continent is the most evident example momentarily. In all world regions there are factors in play that reduce the prospects of adequate airport infrastructure being realised. Equally, there are factors that promote them.

Anyone involved in the management of airports or the supply of infrastructure needs to know just where the action is (and isn’t).

The database may be interrogated in a variety of ways to produce and publish tables and charts which demonstrate how capital expenditure is being made in different regions and countries, and whether it is on existing or new airports and how it is evolving over time.

For example, airport construction and development activity as of the beginning of Sep-2013 totalled USD101.19 billion in Asia Pacific, USD74.57 billion in North America and fractionally under USD74 billion allocated in Europe, where the ‘capacity crunch’ is allegedly most evident as indicated earlier. The global total amounts to USD320 billion. The online presentation can be adjusted to demonstrate how these amounts vary on a monthly basis.

Total Airport Construction activity by region (USD) as of Sep-2013 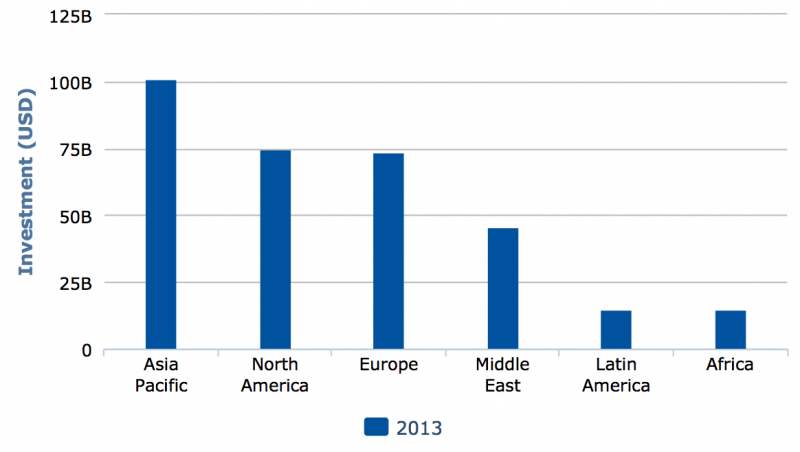 The graphic below is indicative of New airport construction project commitments announced between fixed dates. 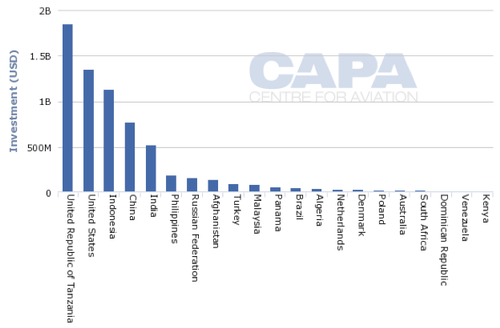 Analysing activity by country, the database shows that in the UK there is currently construction activity at 20 airports (including London Heathrow as mentioned earlier), with a total known actual/estimated value of USD16.49 billion.

Analysing activity by region and sub-region the database shows that in the Southern Africa sub-region there is currently construction activity at 17 airports in seven countries, with a total known actual/estimated value of USD1.77 billion.

Separately, there is a table of entirely new airports under construction.

Heathrow Airport will invest GBP3 billion in developing infrastructure in period 'Q6'. The plan will cover the period between 2014 and 2019 and follows a GBP5 billion investment plan between 2008 and 2013/14, which includes the new T2. Alongside the development plans, Heathrow revealed a major increase to airline charges. The reason for the increase in charges was given as "because fewer passengers have travelled through the airport than originally predicted" and "because investors in Heathrow want to see a return on their investment".

The current centrepiece of Heathrow’s infrastructure transformation is the construction of the new Terminal 2, which is due to open in mid-2014. The new Terminal 2 will initially be able to process 20 million passengers p/a, the same as its predecessor. It will be extended to incorporate the current Terminal 1 from 2016 for a total capacity of 30 million passengers. However, Heathrow's overall capacity remains fixed at around 70 million ppa pending any further runway construction.

Heathrow Airport issued a tender for the refurbishment of tunnels underneath the airport in Mar-2013, with the tender having an estimated value of between GBP80 million and GBP130 million.

The total potential investment at Heathrow, including speculative projects such as the third runway and Terminal 6, runs to USD13 billion.

Jun-2013. Heathrow Airport stated potential plans to reduce its allowable return would make future plans to invest GBP3 billion in the asset "economically irrational". In its response submitted to the UK CAA, Heathrow said its shareholders would not provide the funds for future necessary investment on a capped and reduced level of allowable return.

Jul-2013. Heathrow Airport outlined new plans for a third runway at London's main airport, describing them as cheaper than, and quicker to build than, rival proposals. It is submitting three options which propose a third runway being placed to the north, northwest or southwest of the existing airport. Either option would deliver extra capacity by 2025-29 for GBP14 billion - GBP18 billion (USD21 billion - USD27 billion), and would be cheaper and quicker to build than rival hub options being proposed (GBP65 billion). Heathrow Airport prefers the two westerly options as they minimise the noise impact on local residents though they would cost more, and take longer to build than the north option. Each option would raise capacity to 740,000 flights a year from 480,000 currently, and cater for 130 million passengers.

Jul-2013. Four construction companies are vying for a GBP130 million tunnel refurbishment project at Heathrow. The contract will see the winning bidder refit the main tunnel and cargo tunnel which provide access to the terminal area of the airport. The 630m twin bore main tunnel was construction in the 1950s and the 830m cargo tunnel was built in the 1960s. The tunnels require replacement of the ventilation systems, updated fire protection measures, new lighting systems, electrical systems; phone and CCTV systems; radio broadcast equipment; speed cameras; drainage and emergency signage and tunnel closure systems. The winning bidder will have to take responsibility for maintaining current systems in the tunnels during the project and will need to keep the tunnels in operation while the work is going on. The work is slated to take just over three years to complete.

The new data tools are already supporting decision makers at companies worldwide. These include airports, airlines, airport construction firms, airport architects, airport equipment suppliers, airport investors and financiers, government and regulatory agencies, advisory and consultant firms and other organisations with an interest in the financial, development, investment and commercial aspects of the world’s airports.