Scheduled airline capacity continues to grow at a rate of 5% year-on-year, matching the average monthly capacity increase for 2011, based on the latest scheduled data from OAG. The number of flights increased by 3% in the month and the average number of seats per aircraft frequency also grew again in Apr-2011, by 1.25%.

Capacity is increasing coinciding with the entry of more A380s and B777-300s into airline fleets with schedules supporting the increase. 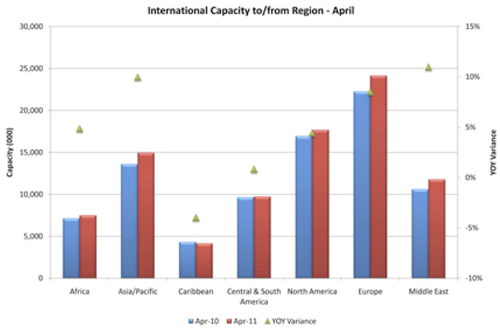 Worldwide LCC scheduled capacity again increased in Apr-2011, by 8% following growth of 10% in Mar-2011. The highest growth by region is to/from Central and South America for both frequencies and available seats – 28% and 27% respectively. The to/from Africa region recorded a reduction of 3% in both frequencies and seats arguably reflecting the effects of the continuing political instability in the region. 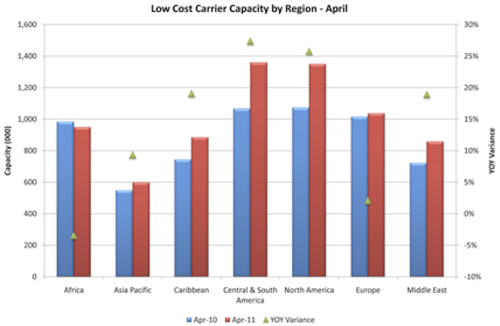 Northeast Asia is the largest volume growth in the region in Apr-2011 with more than 2.3 million seats added within the region. In particular, China has more than 3.0 million seats being added with domestic up 7% and international up 12%. Two noticeable service increases are Emirates continuing to extend A380 deployment to Hong Kong on the second daily service and Aeroflot introducing a second daily service to Shanghai. Of the top 10 airports worldwide by capacity, Hong Kong has the highest increase of any airport with a growth of 15% in available seats.

New routes and service restoration to North America, particularly from the main hubs of Beijing, Shanghai and Singapore have helped push capacity growth between Asia/Pacific and the US and Canada up by a combined 29% – the market overall being up 11%. 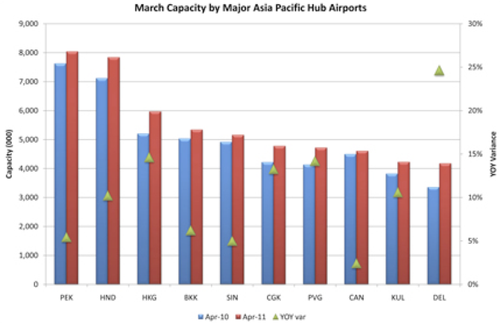 Delhi had the largest growth worldwide in available seats and this is reflected in the airport having the highest percentage uplift of the major Asia Pacific airports. Hong Kong and Shanghai follow with 15% and 14% growth, respectively.

Low cost in the Asia Pacific region also grew strongly recording a 16% growth in available seats. Again, North East Asia is a key driver of volume in this sector with more than 1.1 million seats added in Apr-2011. In terms of total worldwide LCC growth for 2011 so far, low cost within Asia Pacific accounts for more than 45% of the uplift in available seats, approaching some 11 million additional seats for the first four months of the year.

Traffic within North America grew modestly again in Apr-2011 with a 2% increase compared with 3% in Mar-2011. North America is the only region to record a decline in numbers against 2002 as the legacy carriers continue their battle with low cost and increased competition in a largely saturated market. Additionally, for the first time, LCCs now represent more than 30% of available capacity of the domestic US market. The growth in LCC capacity however does not represent any overall growth for the market. LCCs have grown their domestic volume by 40% compared to Apr-2002 while the overall US domestic market has declined 9%. 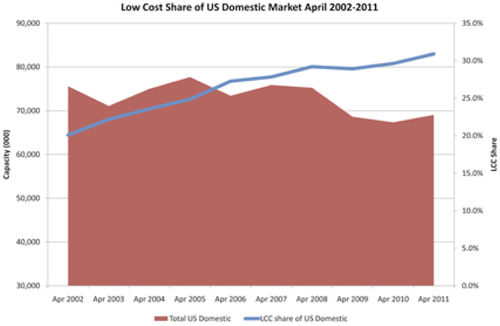 Europe recorded a 2% increase in capacity within the region in Apr-2011. The number of seats to/from Europe increased 9% in Apr-2011 following growth of 10% in Mar-2011. Europe is a key regional destination for A380 and only the to/from Asia Pacific region has a higher average aircraft capacity. 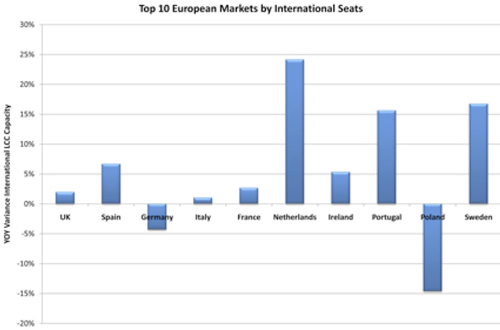 UK domestic took a big hit with an 18% drop in available seats. This demonstrates the continuing impact of UK Air Passenger Duty charging and the improvement of rail service, particularly to/from London. Most recently easyJet and flybe have removed services to the capital from the regions. More known reductions on domestic services are expected to filter into the May-2011 figures.

Low-cost seat expansion within Europe was again a modest 3%. Poland and Denmark (in terms of international service) recorded large reductions with the latter being impacted by Sterling and the loss of Transavia services. Of the top 10 international markets, Germany also saw a reduction in volume that is in part a reflection of Ryanair removing services from Frankfurt Hahn, Weeze (Niederrhein), and Bremen airports in response to changes in the German aviation tax regime.

Capacity in and to/from Africa increased again in Apr-2011. Growth of 4% in Apr-2011 was slower than the 7% increase reported in Mar-2011 and by 11% in Feb-2011. Undoubtedly, the political events in the region are having a sustained effect on scheduled capacity and it is expected that this trend may continue on during the month and beyond. Many services have been cancelled or suspended until more stable political conditions are delivered. The North African situation is affecting both full-service and low-cost carrier. 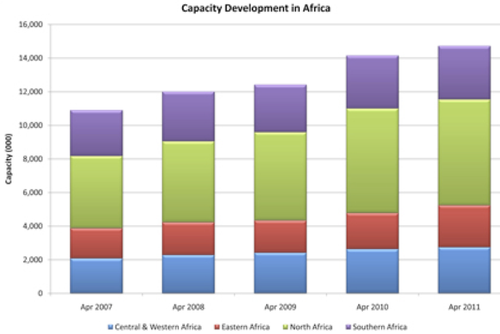 In terms of percentage reductions in capacity by airport, Abidjan and Luanda have been the most affected globally for the month (-42% and -37%). Political issues surround the fall in capacity in Abidjan. Marrakesh and Entebbe are also in the top 10. However there is some positive news as Hainan Airlines has restored its third weekly Beijing-Dubai-Luanda service (from 27-Mar-2011). LCC capacity to/from the region declined 3% year-on-year and compares against an increase of 5% in Mar-2011. Low cost within Southern Africa and to/from North Africa being the main two reductions in the region with 6% and 5% respectively.

Looking at the main hub airports by scheduled capacity, Atlanta is the world’s largest airport again followed by Beijing for the second month. Tokyo Haneda has swapped places again with London Heathrow however there will undoubtedly be some further changes during the month as carriers manage their capacity to Japan. Haneda and Heathrow are very close in terms of capacity with only 11,123 seats difference.

Of the top 30 airports in terms of available seats, only Madrid (11th) and Denver (15th) showed any reductions in volume, 3% and 0.4%, respectively. In terms of absolute volume, Delhi Airport had the largest growth (825,000 seats) followed by Hong Kong with over 760,000 seats.

There are four European airports in the bottom five airports for the month in terms of lost volume year-on-year, namely Madrid, Cologne, Athens and Stansted. The Athens market continues to digest the Olympic/Aegean merger, coupled with tough economic conditions in that market. London Stansted reported a reduction of 284,000 seats reflecting, in part, the increasing pressures on domestic UK services with train competition and general reductions from the main based carriers Ryanair and easyJet. Additionally, Air Berlin moved two services to London Gatwick.