Simulator manufacturer CAE reported another strong day of trading on Monday, with its share price gaining 4.1%, to finish the day at CAD9.20, a gain of just under 50 cents since it announced a weak third quarter result late last week.

The Canadian company’s revenues dropped 9.8% to CAD382.9 million in its third fiscal quarter, as the weak civilian market outweighed stronger results from its military segment. Profit was down 25% to CAD37.7 million, in line market expectations, but was affected by CAD3.9 million in restructuring costs, as the company continues its CAD34 million restructuring plan, due to be finished by the end of its fiscal year.

Civil and service revenue are closely linked to the health of the civil aerospace industry and the aircraft ordering and delivery cycle. With plunging aircraft orders last year, and similar ordering expectations for 2010, weakness in the civil segment is expected to persist in the short to medium term. The manufacturer expects to sell 20 full-flight simulators for the fiscal year, having sold 14 in the first three quarters.

CEO & President, Mark Parent, stated that the civil aerospace market is “showing signs of stabilising at current low levels" and forecast a gradual recovery, which will eventually benefit the commercial side of the company’s business. Defense business is expected to continue its growth globally. 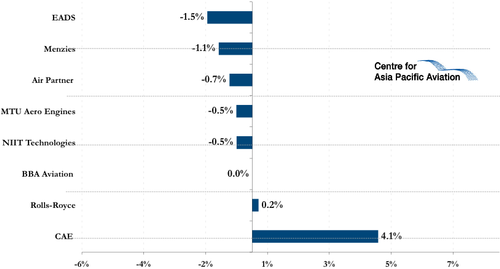