European carriers’ shares were pushed higher by wider markets on Wednesday (14-Apr-2010), despite a strong gain in oil prices (+2.1%), to USD85.84. European markets were boosted by positive financial results from Intel Corp and JPMorgan Chase & Co.

Turkish Airlines was flat after CEO, Temel Kotil, stated the carrier would focus on organic growth to boost market share rather than acquiring another airline. But he has not categorically ruled out acquiring another carrier, such as JAT Airways or LOT Polish Airlines, as it seeks to become Europe’s third largest carrier.

Mr Kotil also stated the carrier could report a 40% increase in transit passengers in 2010, adding that the carrier may revise its year-end targets in the coming months, following a strong first quarter. The current target is for 30 million passengers and USD5.7 billion in revenue in 2010.

The carrier added that while it has no plans for another large-scale aircraft order in 2010, "this doesn't mean that this won't change by the end of the year." The carrier has so far received 89 of a planned 105-aircraft order with Boeing and Airbus. 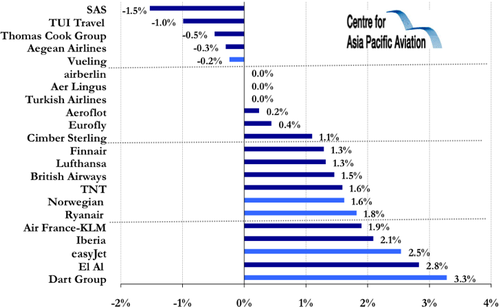