European airline shares rebounded on Tuesday (17-Aug-2010) as wider markets made strong gains for the day. Markets were boosted by the insurance sector, after the European Union approved Aegon’s recapitalisation plan.

British Airways (+2.3%) rose after news BAA reached an agreement with engineering, firefighting and security staff union, Unite, avoiding strike action that would have shutdown all of BAA’s airports. easyJet (+0.2%) did not benefit as much from the news.

Also during trading, BA CEO, Willie Walsh, stated forward bookings for Gulf services "have not been affected by the experience that our customers have seen during the industrial action" by cabin crew. Mr Walsh added that the carrier plans to increase capacity in the region by 3% over winter 2010/2011. Mr Walsh added that there is “significant increases in demand” in the Middle East region. “We believe there is some scope for capacity and we will be increasing slightly our flying there next winter," he said.

Ryanair (+1.9%) gained after announcing a number of new routes. The carrier plans to increase operations at its Barcelona El Prat base, with the launch of services to Fuerteventura service and increased frequencies on nine other routes, including Brussels (Charleroi), Cagliari, Dusseldorf (Weeze), Edinburgh, Gran Canaria, Milan (Bergamo), Paris (Beauvais), Rome (Ciampino) and Venice (Treviso) from Nov-2010. Three new aircraft will be based at El Prat, increasing the number of aircraft based at the airport to eight.

Ryanair also plans to open four new routes from London Gatwick. From 31-Oct-2010, the LCC will operate from Gatwick to Bologna, Faro, Milan Bergamo and Porto. Ryanair will also increase frequency on its Gatwick-Oslo Rygge service to 10-times weekly.

Elsewhere, Aer Lingus (+8.0%) was the biggest gainer of the day, presumably also benefiting from the cancellation of strike action at BAA and a 1.6% rise in the ISEQ. The carrier is due to report next week. El Al (+5.3%) also gained.

Cimber Sterling (-2.5%) was the only carrier to decline for the day, while Eurofly and SAS were flat. 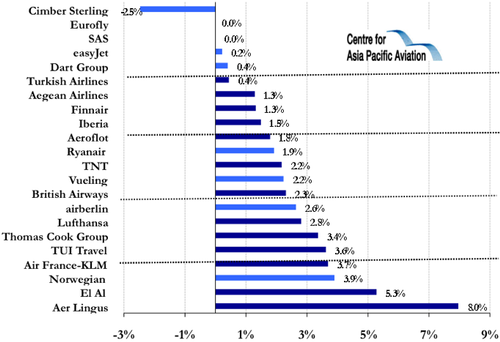