BA CEO, Willie Walsh, has held “very open and frank talks” with Unite union leaders, with the negotiations designed to head off possible strike action by airline employees over 1,700 cabin crew cuts, in addition to other check-in and administration staff reductions.

Mr Walsh has meanwhile weighed into the debate over the future of his former employer, Aer Lingus. He stated the Irish airline’s future could involve a merger with another airline, although the current ownership of the national airline would “make it difficult to attract investors”. Mr Walsh added a merger with Ryanair would be "very difficult" and would not benefit consumers. Aer Lingus’ shares eased 2.8% yesterday.

Ryanair has meanwhile confirmed it has entered into discussions with Shannon Airport about the terms for an extension of Ryanair’s five-year base agreement at Shannon which expires in Apr-2010. Ryanair stated it has grown its annual traffic at Shannon from 300,000 passengers in 2004 to 1.9 million last year.

Ryanair stated it has lost money in each of the five years it has operated a base at Shannon, but stated it is willing to continue to base aircraft there if the EUR10 Irish tourist tax is removed on or before 01-Feb-2010 and if Shannon Airport extends Ryanair’s cost agreement on a "competitive basis" for a further five-year period. Ryanair is seeking a 50% reduction in its costs at Shannon, which would reflect the "70% decline in average fares which Ryanair has suffered at Shannon over the past five years". 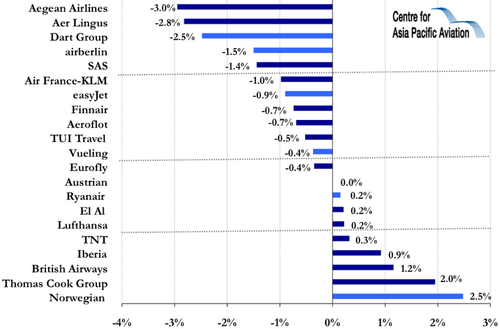