British Airways surges with release of first half financials

Shares in British Airways surged 6.7% on Friday, upon the release of the carrier’s financial results for the six months ended 30-Sep-2009.

However, BA stated demand may be starting to recover, and volumes and yields appear to have stabilised, after Premium traffic fell only 1.4% year-on-year in Oct-2009, compared to 7.9% in Sep-2009. CEO, Willie Walsh stated revenues are likely to be GBP1 billion lower year-on-year in 2009 as a result, after reporting a loss before tax of GBP292 million for 1H2009/10. See separate report - British Airways biggest loss sends shares up as a glimmer of hope appears; “Permanent changes” ahead

Aer Lingus’ shares rose 3.3% on Friday, on the release of the carrier’s traffic highlights for Oct-2009. The Irish carrier stabilised a decline in passenger traffic, with total passenger numbers down just 0.2% year-on-year. However, long-haul traffic declined 25.7% year-on-year in Oct-2009. Aer Lingus increased its load factor by 1.3 ppts to 74.6% for Oct-2009.

In other European finance news, Alitalia reported an operating profit of EUR15 million, compared to a EUR210 million loss in the previous corresponding period. Meanwhile, Icelandair announced it has postponed the release of its 3Q2009 financial results to Dec-2009. The carrier added revenue for the period increased 29% year-on-year while EBITDA rose 35.5%.

Norwegian meanwhile shed 7.1% on the day. 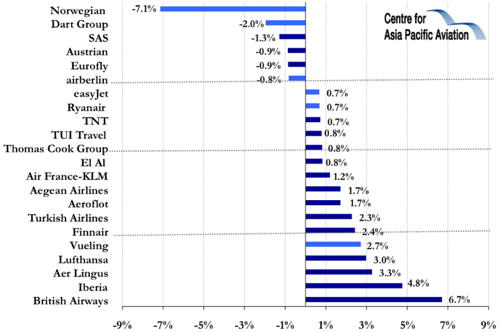