European airline shares improved for another day on Monday (02-Aug-2010) as wider markets reached a three-month high in early trading. Markets were boosted by impressive financial results from BNP Paribas and HSBC Holdings and news the Institute for Supply Management index fell less than expected, from 56.2% in Jun-2010 to 55.5% in Jul-2010.

British Airways is flying high after Citigroup and the Royal Bank of Scotland raised their price targets for the airline. Citi raised its target price by GBP 12 pence to GBP 295 pence after expressing 100% confidence that British Airways’ joint venture with American Airlines will go ahead. The bank believes the synergies in the joint venture are worth GBP 25 pence per share

RBS increased its rating of BA’s shares from GBP 300 pence to GBP 330 pence. It also maintained a "buy" rating.

The move pushed Iberia (+4.9%) shares higher, as the carrier is also part of the planned trans-Atlantic JV.

Norwegian (+5.9%) and Thomas Cook Group (+4.9%) also made strong gains. Thomas Cook was up on news Numis raised its recommendation of the travel group’s shares from "hold" to "add" as the stock “looks cheap and the current price may well represent an attractive entry point on a medium-term view”. However, the company stated it expects a “subdued” interim management update from Thomas Cook on 11-Aug-2010.

Aeroflot (+0.9%) rose only slightly, despite Russia’s Micex Index (+2.3%) advancing to its highest point in three months on an increase in oil prices and reports China is considering moves to cool economic growth. 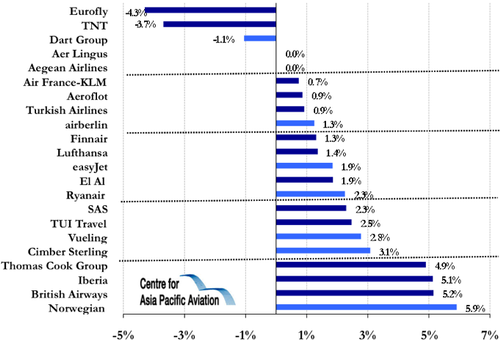