The majority of European carriers' shares were up on Tuesday (16-Mar-2010), moving with wider markets, after EU ministers agreed to a plan to help Greece financially, if required.

British Airways up after pension agreement

British Airways (+4.5%) gained after announcing it has reached an agreement with trade unions to reduce its GBP3.7 billion pension deficit, to avoid the closure of the schemes. The carrier stated the deal will allow it to keep its two pension plans open for current employees and freeze payments at GBP330 million p/a over 20 years. Staff will now be asked to vote on the deal, to be recommended by unions. The move brings it a step closer to its merger with Iberia, after the Spanish airline requested the issue be dealt with before a final agreement is signed.

Elsewhere, Air Berlin (-1.0%) shares fell after the carrier announced it agreed with Boeing to "streamline" its order book to account for a "change in market conditions", and to meet Air Berlin’s "specific operative requirements".

The two parties have agreed on a reduction of the number of firm orders of B787 aircraft from 25 to 15 (the ten aircraft have a current list price of approximately USD1.7 billion) and to reduce the number of optional B787 aircraft from ten to five. The agreement also provides that the delivery of nine B737 aircraft will be rescheduled to 2015. These aircraft were originally scheduled for delivery in 2010 or 2011, respectively. 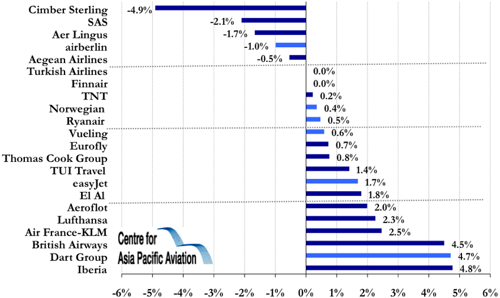