British Airways, upon the release of its Nov-2009 traffic highlights stated volumes and yields in non-premium and short haul premium markets are now “stable”, with long haul premium demand “showing signs of improvement” with volumes above Nov-2008 levels and yields “improving”.

In the month, the carrier experienced a 1.7% reduction in premium traffic, for 15 consecutive months of contractions, and a 4.8% reduction in non-premium traffic. The carrier added that within the premium cabins, Club World traffic up 1.5%, while Club Europe was down 20% on a year-on-year basis.

However, premium traffic comparisons are starting to be against a weaker base, with both premium and non-premium traffic growth in negative territory from Nov-2008. 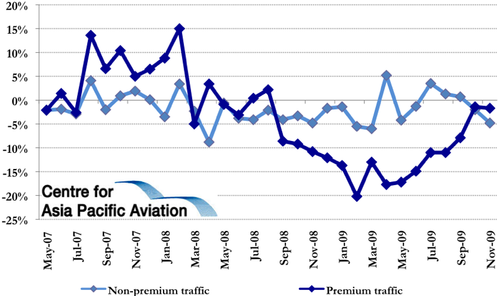 Another encouraging sign is that the 12-month moving average of British Airways’ premium demand showed signs of improvement last month, following a stabilisation in Aug/Sep-2009, down by 11.8% in Nov-2009. 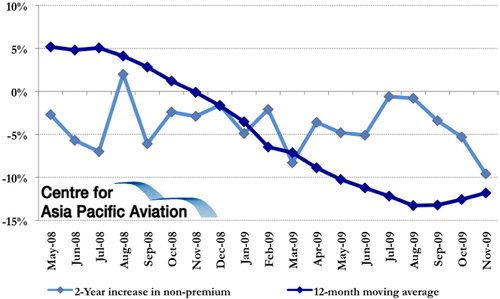 BA, upon the release of its financial results for the six months ended Sep-2009, reported a 12.2% reduction in yields (passenger revenue per RPK) to GBP 5.99 pence (or down 18.2%, excluding exchange), with PRASM (passenger revenue per ASK) down 10.9% to GBP 4.83 pence. These double-digit reductions were “largely as a result of lower year-on-year surcharges and sales mix within cabin class”.

The airline added that it hoped to report growth in overall passenger volumes again in the New Year. It previously stated, “in January, the comparative figures take another step down and there's every chance of getting into positive territory then”.