Anyone suspecting the global recession is almost over ought reflect on British Airways’ latest traffic report. Highly attuned to changes in business travel demand – a key indicator of the health of the underlying economy – British Airways reported another deep decline in premium traffic last month.

The airline reported that market conditions remain “very challenging”, with traffic volumes “under pressure in premium and yield under pressure in all cabins”. BA’s premium traffic fell 17.7% last month – the sixth consecutive month of double-digit declines.

The carrier’s CEO, Willie Walsh, last week declared the aviation sector was facing “the worst trading conditions” in its history. Late last month, Mr Walsh told Reuters, "I don't see a sign of improvement in the economic environment. It will get worse before it gets better”. 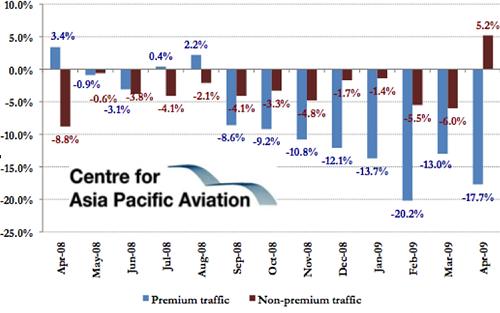