British Airways reported a 1% year-on-year increase in passenger traffic (RPKs) in Jul-2008, including an 11% reduction in premium traffic and 3.5% increase in non-premium traffic. The steep fall in premium demand (albeit an improvement on previous months) is playing havoc with the airline’s yield. BA stated, “yield uncertainty continues to make revenue forecasting difficult”.

The carrier stated that while underlying volumes and seat factors stabilised during the first quarter and are “expected to improve in the peak Summer months”, yields will be “under pressure from the year-on-year impact of lower fuel surcharges, exchange movements and mix”. 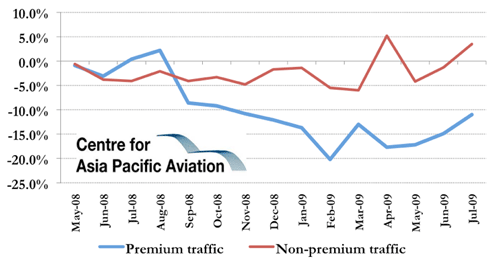 Reviewing BA’s cumulative two-year change in premium traffic, there was some improvement last month, but there is still a long way to go before normalcy is restored. 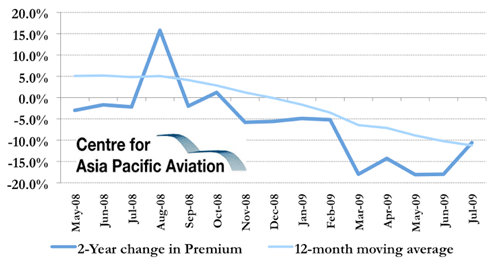 Yields down sharply in first quarter

BA’s cargo business was hit even harder, with “significant excess capacity driving lower prices”. Cargo revenue collapsed by 28.1% in the first quarter, as FTKs declined by 11.5% and cargo yields fell 18.8%, “driven by lower levels of fuel surcharges as the oil price fell and significant price declines”.

As the yield picture remains highly uncertain, BA has moved to raise approximately GBP680 million of liquidity through a GBP350 million convertible bond issue and by gaining access to bank facilities, which are currently used to provide guarantees to its pension funds. This will increase liquidity to approximately GBP2 billion to help BA ride out the current difficult trading conditions.

On 31-Jul-2009, CEO, Willie Walsh, stated trading conditions “continue to be very challenging”, with “no visible signs of improvement”. He added, “our work to reduce costs, which started last October, is beginning to bear fruit as they are down 6.6%, but with revenue still weak, there is much more to be done”.