On Monday, BA cabin crew, represented by the Unite union, voted overwhelmingly in favour of strike action between 22-Dec-2009 and 02-Jan-2010, which would cause massive disruption over the peak Christmas/new Year period.

In response, the carrier announced plans yesterday to commence legal action in an attempt to "protect customers from the massive stress and disruption threatened by Unite's decision to call a 12-day strike”. The carrier has written to Unite, highlighting "irregularities in the union's strike ballot, which the airline believes renders the ballot invalid". As a back-up to the legal action, BA managers have been establishing which cabin crew might wish to work normally during the strike period.

Shares in Iberia dipped 1.6% upon the release of the Spanish carrier’s traffic report for Nov-2009. Passenger traffic (RPKs) declined 5.9% year-on-year for the month, while the carrier stabilised capacity, as load factor rose 0.7 ppts year-on-year to 77.8% in Nov-2009.

Elsewhere, rivals Lufthansa and Air France-KLM declined 0.2% and 0.8%, respectively. An Air France A380 aircraft with 511 passengers operating to Paris failed to depart from New York yesterday, due to technical issues with its fuel tank. 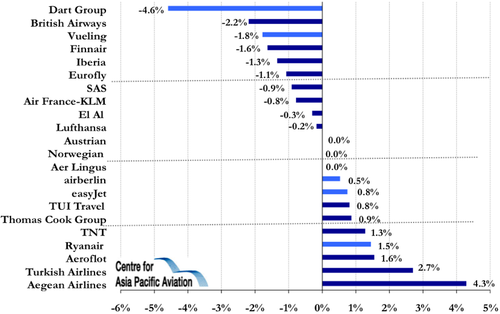