Goldman Sachs Group added the carrier to the “conviction buy” list yesterday, based on BA’s cost cutting efforts, potential synergies from the proposed merger with Iberia and signs of improvement in premium travel demand.

Meanwhile, BA CFO, Keith Williams, revealed earlier in the week that negotiations with Iberia have intensified. The carrier plans to reach a pre-agreement on the merger by the end of Sep-2009. Iberia jumped 4.6% yesterday.

Shares in Finnair gained 5.0% yesterday, as the carrier announced it is considering the issuance of hybrid capital bonds, with the potential issue expected to be launched in the "near future" subject to market conditions. The targeted minimum size of the issue is EUR80 million, with the carrier appointing Nordea Markets to act as a sole bookrunner of the potential issue. Aventum Oy has acted as Finnair's adviser in the arrangement. 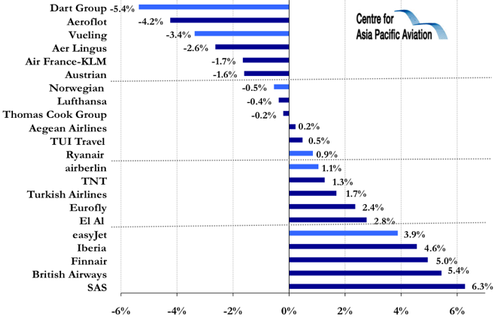