British Airways (BA) is facing massive disruption over the peak Christmas/New Year period, as cabin crew represented by the Unite union voted overwhelmingly in favour of strike action between 22-Dec-2009 and 02-Jan-2010. Even if the staff do not strike, the loss to BA will be extensive, as passengers cancel and buy tickets with rival carriers. Loss-making BA faces tens of millions of pounds in lost revenue, with up to several hundred million if the industrial action proceeds for the full 12 days. But the impact on the airline's coherence and brand may be irreversible.

There will be enormous pressure on management in coming days to find a compromise. But, given the - relatively limited - cuts involved, that would send a bad message for the future. BA needs to achieve deep cost reductions to secure the carrier's long-term sustainability.

BA employs 13,500 cabin crew, of whom 11,500 work at Heathrow. About 9,000 work on long-haul routes. The carrier will be attempting to maintain its more lucrative long-haul network over the coming weeks (eg BA will be aiming to ensure Asia Pacific and America services are less affected than short-haul operations).

BA is offering passengers booked to fly during the strike period the opportunity to change the dates of their travel free of charge.

The carrier stated it was extremely disappointed by the decision, which it said, “showed a lack of concern for its customers, its business and other employees”. The union stated id it remained open to negotiations, but only if BA reverses changes to working practices.

Separately, BA stated its pension deficit has widened to GBP3.7 billion from GBP2.1 billion and the carrier would work with the trustees of its two pension funds on a recovery programme. Resolving the shortfall is crucial in finalising a merger agreement with Spain’s Iberia.

Elsewhere, rivals Lufthansa and Air France-KLM rose 0.9% and 2.5%, respectively, in what was a fairly solid day for European equities. 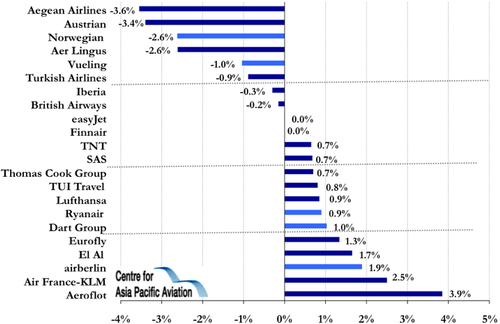