easyJet's shares eased a further 3% on 30-Jan-09 after the previous day's 8.1% fall on news CEO, Andy Harrison, had offloaded half his stake in the carrier, raising approximately GBP1.3 million.

According to the airline, the sale was made for "personal reasons" (apparently linked to Mr Harrison's divorce), but the timing could not have been worse in a week the IMF declared the British economy would be the weakest in Europe this year, contracting 2.8%.

Investors may have been further unsettled by reports the airline is seeking to appoint a new Chairman to replace Sir Colin Chandler, who is expected to announce his retirement in Autumn-09 at next week's shareholders' meeting.

The meeting is expected to be a fiery affair as founder, Sir Stelios Haji-Ioannou, maintains his calls for capacity restraint - in conflict with other Board members. At the World Economic Forum in Davos, Sir Stelios reiterated he was "very worried" about Summer bookings at the airline, because of rising unemployment. His caution may be backed up by a recent easyjet promotion offering 25% off every seat across its route network for travel between 04-Feb-09 and 15-Jul-09. 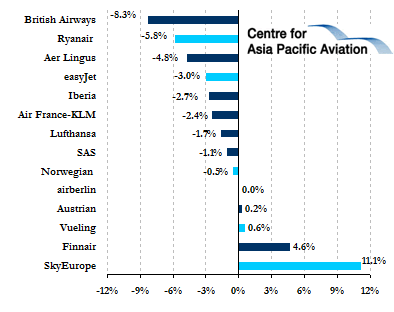