European markets made tidy gains on Monday (18-Jan-2010), recovering from falls on Friday (15-Jan-2010), thanks to gains in mining stocks and a rebound in banking shares in London.

All major European markets closed higher, except for Greece’s Athens Exchange, which fell 2.5% ahead of an assessment of the country’s three-year plan to reduce its financial deficit by European Union finance ministers on Monday night. The UK FSTE, France’s CAC and Germany’s DAX were up 0.7%, 0.6% and 0.7%, respectively.

British Airways (+1.1%) shares were up at the end of trading, as Unite, representing cabin crew staff, announced plans to conduct a new industrial action ballot on 25-Jan-2010. The move follows the "failure to secure an agreement between the two sides on the crucial issues of imposed changes to the workload and working conditions of cabin crew", according to Unite.

Negotiations ended on 15-Jan-2010 and no date has been set for a further meeting. In Dec-2009, cabin crew voted to take strike action, although the ballot was subsequently ruled unlawful by the High Court. If cabin crew vote for industrial action, it could commence from Mar-2010.

Lufthansa (+0.3%) also gained marginally despite their pilots union, VC, stating industrial action may commence as soon as voting for the strike is complete on 17-Feb-2010. Pilots are now considering reversing their decision on accepting the carrier’s plans not to provide them with a pay rise.

Lufthansa stated a walkout is “incomprehensible” as the pilots already receive good working conditions and the carrier has no plans for compulsory firings, and will resume talks if the union is willing. The carrier plans to cut costs by EUR1 billion by the end of 2011.

In LCC news, Ryanair (+0.7%) rose despite CEO, Michael O’Leary, stating during trading that the LCC had a “difficult year” in 2009.

Norwegian (-3.6%) meanwhile continued its decent during trading, while Eurofly (-0.9%) and Dart Group (-0.5%) were also down. Iberia (+1.6%) also made gains. The carrier announced during trading it has extended its full content agreement with Amadeus until 2014.

For more of the latest on what’s happening in Europe, see Europe Airline Daily. It's all right here! Other articles featured in today’s issue include: 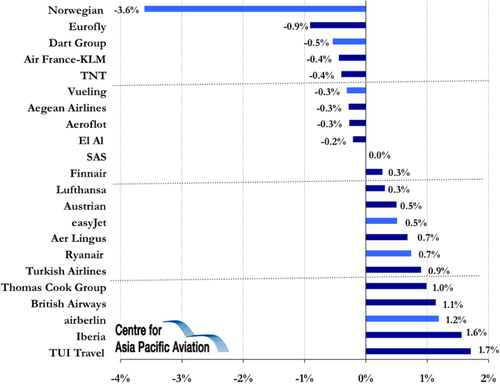