International share markets, including Europe, were down on Wednesday (20-Jan-2010) on news Chinese regulators have ordered some of the country’s banks to temporarily stop lending (until the end of Jan-2010), to slow credit growth, after a surge in lending so far this year.

Investors were as a result concerned the halt of lending in China would affect the global economic recovery. Equity markets were down as a result, and airlines followed the trend, despite a drop in oil prices (-1.7%), to USD77.62. In major markets, UK’s FTSE (-1.7%), France’s CAC (-2.0%) and Germany’s DAC (-2.1) were all well down.

British Airways (+0.9%) was one of the few carriers to make gains on Wednesday, after its cabin crew union, Unite, announced it will not call strikes over the Easter holiday should further industrial action be sanctioned by the staff. Unite will open the cabin crew ballot on 25-Jan-2010, to conclude on 22-Feb-2010. The union added it hopes it can resolve the dispute though negotiation with the carrier, without the need for a strike. British Airways responded stating “assurances about an unspecified Easter holiday period will be of little comfort to [passengers]”.

Iberia (+1.7%) meanwhile continued to rise on news it may complete its merger with British Airways by Feb-2010.

Ryanair reportedly planning to increase fares at start of FY2010-11

Ryanair (-1.5%) reportedly plans to increase fares for the first time in four years, to sustain earnings growth as the carrier slows its expansion plans.

Aegean Airlines (-1.7%) shares fell despite reporting a 10% increase in passenger traffic in 2009, on the back of a 22% jump in international traffic and a 2% increase in domestic traffic.

Air France-KLM (-1.5%) fell back yesterday. Three bidders have reportedly expressed in LOT Polish Airlines thus far, including one airline and two financial investors. However, the Polish Treasury Ministry has denied Air France-KLM is the bidding airline. LOT Polish Airlines reported a net loss of USD63 million in 1H2009, and expects another loss in the second half. The carrier is now seeking an investor to help it return to profitability. 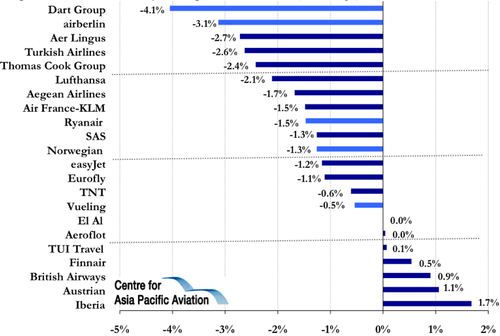