British Airways and Iberia slump despite better than expected results; Aeroflot up

British Airways (-3.6%) and Iberia (-2.5%) were the biggest decliners on Friday (29-Oct-2010) after BA remained cautious on its outlook for 2011. During trading, BA reported a net profit of GBP107 million for the three months ended 30-Sep-2010, compared with a loss of GBP217 million in the previous corresponding period.

Operating profit was also up for the period, at GBP298 million, compared to a loss of GBP111 million in the previous corresponding period. The result was on a 8.4% year-on-year rise in revenue to GBP4,447 million, and a 1.5% rise in operating costs to GBP4,149 million.

The carrier stated in its report that “while positive, the economic environment continues to be subject to uncertainty, to which the increase in APD is unhelpful.  We continue to focus on managing our costs.”

Analysts at Panmure Gordon maintained their "hold" rating for BA’s shares, due to economic uncertainty, despite “excellent improvements” in its financial results. The analysts agreed the increase in the Air Passenger Duty will not help the carrier. However, it did upgrade BA’s target price from GBP 225 pence to GBP 275 pence.

Iberia meanwhile reported operating profit of EUR77 million for the same quarter, compared to a loss of EUR56 million in the previous corresponding period. This was on the back of a 14.9% rise in revenue, to EUR1,341 million, while operating costs were up 12.4%, to EUR1269 million.

Like BA, Iberia also reported improved yields, which gained 4.3% for the period to EUR 6.68 cents. 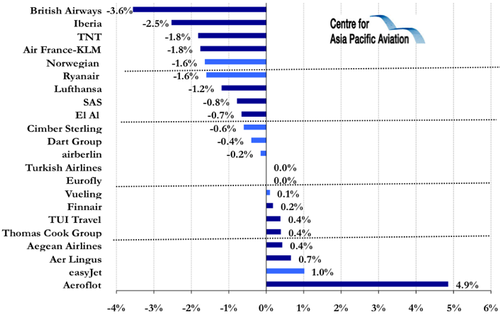