The majority of European airline shares rose on positive news from the sector on Thursday (08-Apr-2010), including the merger of British Airways and Iberia, as well as positive traffic news from Norwegian Air Shuttle and easyJet.

A fall in oil prices (-0.6%), to USD85.39, also had a positive impact on airline shares. Wider markets however slumped to their lowest level in over a week, on continued concerns over Greece’s budget deficit and disappointing jobless claims data in the US. In key markets, UK’s FTSE (-0.9%), France’s CAC (-1.2%) and Germany’s DAX (-0.8%) all ended the session lower.

British Airways (+2.9%) and Iberia (+1.9%) gained after signing a merger agreement, with terms consistent with the binding MoU reached by the airlines in Nov-2009. The carriers stated the agreement marks a "further step towards creating a new leading European airline group". The merger is expected to be completed in late 2010. The carriers stated they expect to present the transaction for shareholder approval in Nov-2010, with completion expected to occur approximately one month later.

The merger will create a new holding company, International Consolidated Airlines Group SA, which will be known as International Airlines Group. Both airlines will retain their current networks and operate under their individual brands - British Airways and Iberia.

The new company will operate 408 aircraft to 200 destinations carrying more than 58 million passengers p/a. It has been structured so that it can take advantage of further consolidation in the global aviation industry. The carriers stated the new group will generate annual synergies of approximately EUR400 million by the fifth year of the merger.

Aeroflot (-3.1%) shares slid after the carrier stated it may float the 25.8% stake of the carrier currently owned by Alexander Lebedev, among a number of options. The carrier agreed to re-acquire the stake in Jan-2010 for approximately USD400 million, as part of a wide-ranging restructuring of the sector. The carrier stated the float would help boost its liquidity, as the Russian Government is unlikely to float any of its stake. Another option is to swap the stake for State assets.

Also during trading, Aeroflot CEO, Vitaly Savelyev, confirmed the carrier will take control of six regional airlines under the state-owned Russian Technologies conglomerate, with an agreement to be concluded before the end of Apr-2010. Once it assumes control of the carriers, it expects to handle approximately 20 million passengers p/a.

Under the agreement, Rossiya, the largest of the carriers, will be transformed from a federal unitary enterprise into a joint stock company and will become a subsidiary of Aeroflot. The St Petersburg City Government will take a 25% stake in the airline. Rossiya’s base at St Petersburg Pulkovo Airport will be developed into an Aeroflot hub.

Europe Airline Daily provides the latest information on what’s happening in the European aviation industry. Other stories featured in today’s issue include: 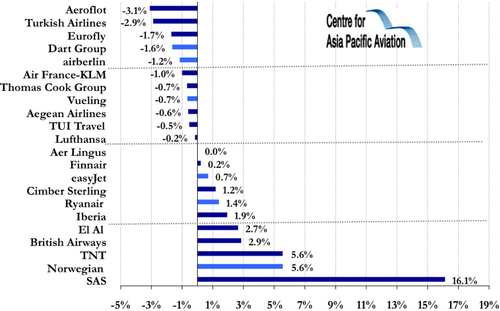