The majority of European airline shares were up on Monday (15-Feb-2010), after the US Department of Transportation (DOT) recommended antitrust approval of an alliance between British Airways, American Airlines, Iberia, Royal Jordanian and Finnair. Another drop in oil prices (-2.0%), to USD73.05, also encouraged airline investors.

British Airways and Iberia shares gain from DOT approval; Finnair not so fortunate

British Airways (+2.6%) and Iberia (+3.2%) were two of the day’s biggest gainers after the US DOT announcement over the weekend. However, Finnair (-2.6%) gave up some of Friday's gains.

According to Bloomberg, British Airways is expected to earn approximately GBP150 million from the sale of four pairs of landing slots at London Heathrow Airport - a DOT condition in the final approval of antitrust immunity.

In other Iberia news, the carrier has reportedly put plans to launch a domestic and medium-haul LCC subsidiary on hold, due to current negotiations to merge with British Airways. Vueling (+2.5%) shares rose as a result.

TUI Travel (-0.7%) reported an underlying EBITA loss of EUR163.6 million for the three months ended 31-Dec-2009, compared to a loss of EUR69 million in the corresponding period last year. The loss came as revenue for the quarter fell 15% year-on-year, to EUR2,933 million.

TUI Group attributed the loss to a decline in volumes in all source markets due to the global financial downturn. The group added the development of French airline, Corsair, affected earnings.

Elsewhere, Eurofly (+12.4%) and Dart Group (+10.8%) made the largest gains of the day, while SAS (-5.5%) and Ryanair (-1.5%) shares fell. Ryanair plans to enter discussions with Irish Tánaiste, Mary Coughlan, over the LCC’s request to open a new maintenance operation at Dublin Airport.

Other stories appearing in today’s Europe Airline Daily include: 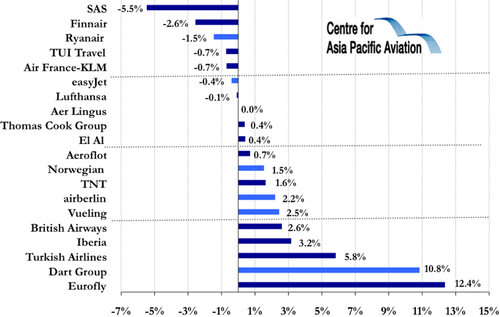