British Airways and Iberia establish MoU for merger by late 2010

Shares in Iberia soared (+11.8%), while British Airways (BA) surged (+7.5%) yesterday, as the carriers announced the Board of Directors agreed on a binding MoU, setting out the basis for a proposed merger of the two carriers to create a new European airline group.

The new group, to be established under the new holding company name of TopCo, would have 419 aircraft and service 205 destinations. The merger, expected to be completed in late 2010, is forecast to generate annual synergies of approximately EUR400 million p/a by the end of the fifth year, following the completion of the merger at a cash cost of up to EUR350 million.

One third of the synergy benefits are expected to be revenue related (joint selling, network and revenue management benefits) with the remainder from cost synergies in areas including IT, fleet, maintenance and back office functions. As part of merger plans, the current operations of each carrier and their individual brands will be retained.

With the announcement, BA CEO, Willie Walsh commented, the merger will “create a strong European airline well able to compete in the 21st century. Both airlines will retain their brands and heritage while achieving significant synergies as a combined force”.

Iberia Chairman and CEO, Antonio Vázquez, added it has been a “long process where many people, both at British Airways and Iberia, have worked very hard to reach this agreement. But in the end it was worth it. This agreement is a giant step in the history of both Iberia and British Airways. We are laying the foundations of what will be one of the most important airlines in the world, a real global airline. I believe that, thanks to this transaction, which is the most important in the European airline industry in recent years, we are more prepared than ever to face future challenges.”

Turkish Airlines’ shares gained 2.2% yesterday, upon the release of the carrier’s financial highlights for the three months ended 30-Sep-2009. The carrier’s operating profit of EUR206.4 million was up 51% year-on-year, as revenue climbed 17% year-on-year to EUR1,314 million. However, net profit declined 7% to EUR170.0 million.

Shares in Air France-KLM improved 3.4% yesterday, as the Air France revealed plans for a new service product, effective 01-Apr-2010. The new service, offered on its medium-haul network, is "aimed at better meeting the changing expectations of travellers seeking greater simplicity and clarity, and more affordable fares". Air France added that the essentials of its service will remain, and its new service "will not be that of a low-cost carrier". The carrier will continue to offer two clearly separate cabins, the "Voyageur" cabin and the "Premium" cabin, but will offer premium customers a choice of two products: the "Premium Eco for those seeking flexibility and efficiency at the best prices and Premium Business for those who opt for more comfort and privacy".

Air France-KLM CEO, Pierre-Henri Gourgeon, stated passenger requirements regarding short-haul travel “have changed. They now want reliable, efficient air transport, with an appropriate service, at the lowest possible price, while retaining the Air France touch. We designed our new medium-haul offering with this in mind.”

Elsewhere, shares in SAS were up 1.0%. The carrier’s credit rating was downgraded by Moody's yesterday from “B3” to “Caal” for the company's long term rating, citing weakening development in earnings due to increased yield pressure in the market. The outlook is “negative” reflecting the industry's negative trend. 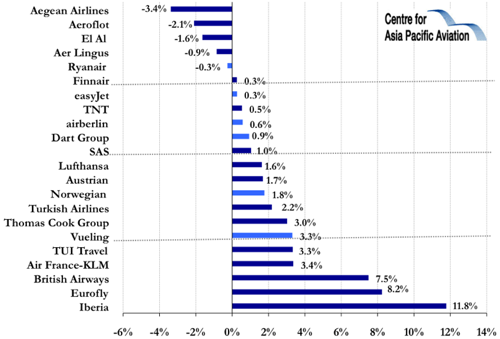 British Airways and Iberia’s boards have agreed a binding MoU setting out the basis for a proposed merger of the carriers to create a new, leading European airline group that recognises the principle of parity at board and management level.

The new airline group would have 419 aircraft and fly to 205 destinations. In 2008, British and Iberia carried 62 million passengers. According to their latest financial year, their joint revenues are of approximately EUR15 billion.

The airlines believe there is a compelling strategic rationale for the transaction, which is expected to generate annual synergies of approximately EUR400 million, and benefit companies’ shareholders, customers and employees. The new group will combine the two companies’ leading positions in the UK and Spain, and enhance their strong presence in the international long-haul markets, while retaining the individual brands and current operations of each airline.

The merger is expected to be completed in late 2010.

TopCo will be a Spanish incorporated company registered in Madrid, Spain. The majority of Board meetings and all shareholders meetings will take place in Madrid. As at completion of the merger, TopCo will be tax resident in Spain. The operating and financial headquarters of the combined group will be located in London, which shall contain the principal management functions of the combined group. A further management office will be located in Madrid.

The TopCo board will comprise 14 directors with seven designated by each airline.

Antonio Vázquez, Chairman and CEO of Iberia, said “it has been a long process where many people, both at British Airways and Iberia, have worked very hard to reach this agreement. But in the end it was worth it. This agreement is a giant step in the history of both Iberia and British Airways. We are laying the foundations of what will be one of the most important airlines in the world, a real global airline. I believe that, thanks to this transaction, which is the most important in the European airline industry in recent years, we are more prepared than ever to face future challenges”.

Willie Walsh, British Airways CEO, said the “merger will create a strong European airline well able to compete in the 21st century. Both airlines will retain their brands and heritage while achieving significant synergies as a combined force”.

Benefits of the proposed merger

The British Airways and Iberia boards believe that the principal benefits of the merger include:

The combined group will offer its customers connections to 205 destinations and strengthen the oneworld alliance. British Airways’ customers will gain access to up to 59 new destinations, of which 13 will be in Latin America, while Iberia’s customers will gain up to 98 new destinations across the British Airways network. They will also be offered better frequencies and connections, more competitive prices, access to more VIP lounges and enhanced frequent flyer benefits.

TopCo will have its primary listing on the Official List of the UK Listing Authority and its ordinary shares will be traded on the main market of the London Stock Exchange and included in FTSE’s UK Index Series. It will comply with the Combined Code and the Pre-Emption Guidelines of the Association of British Insurers and, to the extent that it is legally able to do so, the UK City Code on Takeovers and Mergers. If possible, Topco will also have a secondary listing in the Spanish Stock Exchanges (Mercado continuo español). If there is no such secondary listing, the regulation of takeovers in respect of TopCo will be subject to split jurisdiction between the UK Takeover Panel and Spanish Comisión Nacional del Mercado de Valores (“CNMV”) otherwise, the CNMV will regulate takeover activity in respect of TopCo.

The TopCo Board will comprise 14 directors, including the group CEO and the CEOs of both OpCos and 11 non-executive directors. Antonio Vázquez will be group chairman and Martin Broughton will be deputy group chairman. British Airways and Iberia will each designate three non-executive directors to the TopCo Board (of which one will be Martin Broughton) and four new independent directors will be appointed.

An ownership and governance structure (“National Control Structure”) has been developed to ensure that the existing route licenses and traffic rights of both British Airways and Iberia are retained. For the first five years following completion of the transaction, the majority of the voting shares in British Airways and Iberia will be owned by special UK and Spanish bodies respectively (“National Bodies”). These shares will have minimal economic rights.

The National Bodies will be represented on the respective OpCo boards where their role will be to protect existing route licenses and traffic rights and to ensure compliance with the Assurances (as defined below). The bodies will enter into shareholder agreements with TopCo to ensure that TopCo can manage the combined group as a single economic entity.

The British Airways and Iberia OpCos will retain profit and loss accountability and will implement a joint business plan and synergy plan to be developed by the group management team. Each operating company will retain its respective Air Operators Certificate and remain responsible for its own day to day commercial and operational management.

Each OpCo will have a board comprising nine directors, of whom five will be executives (including both OpCo CEOs and the group CFO). Antonio Vázquez will remain chairman of the Iberia OpCo board and Martin Broughton will also remain chairman of the British Airways OpCo board. Three non-executive directors will be appointed by the respective UK and Spanish National Bodies under the National Control Structure. The decisions of the OpCo boards will be made by simple majority, except for matters which, if effected, would be contrary to the Assurances, which will require the approval of at least seven directors.

The combined business will be led by the group CEO, Willie Walsh, and a management team chosen equally from each airline. It will comprise of the group chief executive officer and group chief financial officer, the chief executives of the each airline (OpCo), a revenue synergies officer and a cost synergies officer. The group management team will be responsible for the overall direction and strategy of the combined business, delivery of synergies and co-ordination of central functions.

To protect the specific interests of British Airways and Iberia and their respective stakeholders both parties will agree to give certain assurances (“Assurances”) that will last for five years from completion of the merger. The Assurances include:

The signing of a definitive merger agreement, which is expected to occur in the first quarter of 2010, remains subject to a small number of pre-conditions including:

It has been agreed that the merger agreement will be subject to the following conditions:

Iberia will be entitled to terminate the merger agreement if the outcome of the discussions between British Airways and its pension trustees is not, in Iberia’s reasonable opinion, satisfactory because it is materially detrimental to the economic premises of the proposed merger.

Under the terms of the MoU the parties have agreed that a break fee of €20million will be paid in certain circumstances. The break fee provisions will also be reflected in the merger agreement.

British Airways and Iberia expect to present the transaction for shareholder approval at the latest in early November 2010 with completion expected to occur approximately one month following such approval.

Further details of the transaction and the joint business plan to be developed by the combined management team will be communicated following execution of the merger agreement.

The proposed merger will not be subject to the UK Takeover Code.