British Airways (+0.3%) made a slight gain after its V-P Americas, Simon Talling-Smith, stated the carrier's trans-Atlantic JV with American Airlines will be launched in Oct-2010, with the carriers to align their FFPs, commence joint marketing to corporate clients in early 2011 and implement schedule changes from Apr-2011.

Iberia (+1.5%) will also be part of the JV when it completes its merger with BA, with Iberia expected to contribute 10% to the venture's estimated USD7 billion in annual revenue, according to Mr Talling-Smith.

Cimber Sterling (+8.0%) was the biggest gainer for the day, after a day earlier reporting an 11% yield increase in Jul-2010 to EUR 11.28 cents, with a 5% RASK increase to EUR 8.46 cents. The carrier commented that the yield increase was achieved through “much better pricing” than in Jul-2009, adding that the figure “clearly shows that the summer of last year was a start-up phase, primarily for leisure traffic, for which pricing was not optimal”.

Finnair loads and passenger numbers down

Finnair was flat, after reporting a day earlier a 1.8 ppt decline in load factor for Aug-2010 to 78.6%. Load factor was down across the carrier’s regions, expect for in Asia, where load factor rose a marginal 0.2 ppts.

According to the carrier, leisure traffic declined more than 9% for Aug-2010. 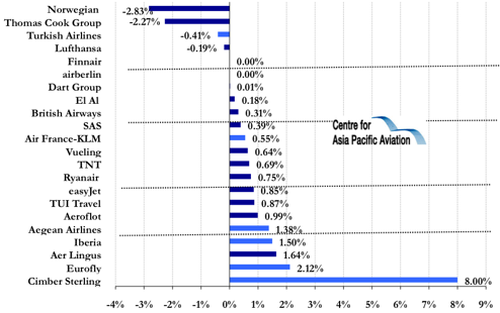