European airline shares were mixed on Friday (21-May-2010), as fuel prices (-1.1%) continued to decline, to USD70.04. European markets fell to their lowest point in over eight months during the day on concerns over the impact of European austerity measures on economic growth.

British Airways aiming to break even this year

CEO, Willie Walsh, stated the carrier believes it can break even on the pretax profit level in the next financial year, but that a “permanent change” is essential to recovery. Chairman, Martin Broughman, meanwhile stated the carrier took “heart in the fact” that although revenue fell by GBP1 billion, so did costs.

Turkish Airlines (-2.9%) fell after confirming the Hava Is workers union gave it notification of an intent to strike over wages and working hours. The notification triggers a 60-day negotiation period. Under Turkish law, notice of six days is required before a strike can be held. Hava Is represents 11,000 workers at the carrier, including pilots and flight attendants.

Elsewhere, SAS (+7.6%) retraced some of its losses earlier in the week as the OMX Stockholm 30 Index (+0.6%). Investors are increasingly looking to the country for investment, as its banks have less risk in Greece, Italy, Portugal and Spain. 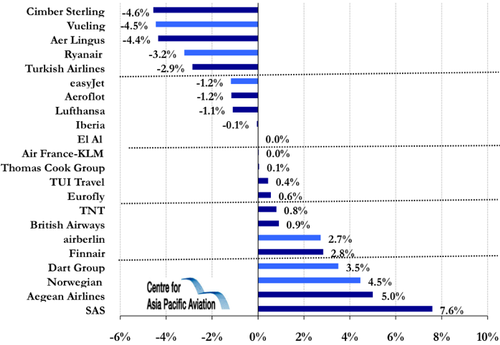