The B787 programme continued flight testing during the quarter, the company reported. Two additional aircraft joined the two already in the flight test programme. The Dreamliner completed key flight test milestones such as flutter, stall and ground-effect tests. On 28-Mar-2010, the static test unit successfully completed the ultimate load test with a fully pressurised cabin. First delivery is expected, as previously anticipated, in 4Q2010. Total firm orders for the B787 at quarter-end were 866 aircraft from 57 customers.

The company said the results reflect solid performances across core businesses and a previously disclosed USD0.20 charge on health care legislation, while the year-ago quarter was reduced by USD0.31 per share on a charge reflecting to poor market conditions in the commercial airplanes unit.

"With clear progress on the B787 and B747-8, solid financial performance and marked improvement in our customer outlook, we continue to draw on the positive momentum we saw at the end of 2009," said Chair, President and Chief Executive Officer Jim McNerney. "Our outlook remains attractive, and we are focused on executing well and delivering on our commitments to customers."

Its free cash flow went from -USD192 million in 1Q2009 to -USD471 million in the current quarter. Cash and investments in marketable securities totaled USD10.4 billion at quarter-end, down USD0.8 billion on investments in development programs. Boeing’s debt remained steady at USD12.9 billion.

Boeing Commercial Airplane suffered from few planned B747 deliveries and challenges with a seat supplier which cost it 11 deliveries in the quarter when it posted revenue of USD7.5 billion, down 13%. Earnings from operations rose 63% to USD679 million.

Operating margin for its commercial business expanded to 9.1%, an increase of 4.2 points, due to the charge on the B747 program related to a reduction in twin-aisle production rates and unfavourable delivery price escalation forecasts. Its strong operating performance partially offset the impact of lower new airplane deliveries from 121 in 1Q2009 to 108 in 1Q2010.

Its B787 order with Delta has entered dangerous territory when Chair and CEO Richard Anderson indicated yesterday that the 787 may not be part of Delta’s future fleet plans. When asked about the order, he said that “technically, yes” Delta was still a B787 customer, which piqued the interest of all on the first quarter conference call.

Mr Anderson clearly indicated the airline had plenty of long-haul capacity and that Delta and Boeing are currently negotiating the fate of the 18-aircraft, 50-purchase rights former Northwest order. Delta, which has 180 widebody aircraft, has extended the leases on its B747-400 fleet on average for about five years and is upgrading them with flatbeds and new seats. Anderson said its long-haul fleet was young.

The company's 2010 financial guidance reflects "solid operating performance amid lower volumes, higher pension expense and continued investment in development programmes". It expects to end the year with between USD64-66 billion in revenues, USD3.50-3.80 per share, down from previous guidance at USD3.70-4.00 per share. BCA expects to deliver 460-465 aircraft this year earning USD31-32 billion in revenues and an operating margin between 6.5-6/7%.

The company continues to expect that 2011 revenue will be higher than 2010, primarily driven by projected B787 and B747-8 deliveries. Combining higher projected deliveries with spending plans for R&D investments and other factors, operating cash flow in 2011 is expected to be greater than USD5 billion.

Defense, Space & Security's revenue for 2010 is expected to be USD32-33 billion, with operating margins of approximately 10%.

Boeing Capital Corporation expects that its aircraft finance portfolio will continue to reduce as its expected new aircraft financing for 2010 is less than USD0.5 billion, below normal portfolio runoff through customer payments and depreciation. BCC's debt-to-equity ratio is expected to return to the 5.0-to-1 level in the second half of 2010.

The company's non-cash pension expense is expected to be approximately USD1.2 billion in 2010.

MTU reaffirmed its forecast for the financial year 2010. The company expects to generate revenues on roughly the same level as last year. Operating profit (EBIT adjusted), which amounted to EUR292.3 million in 2009, is also expected to develop along stable lines, as is net income, which came to EUR141.0 million in 2009.

The company stated, “despite the high research and development expenses to safeguard MTU’s future, the company anticipates a free cash flow of at least EUR100 million in 2010, compared with EUR120.2 million in 2009”. 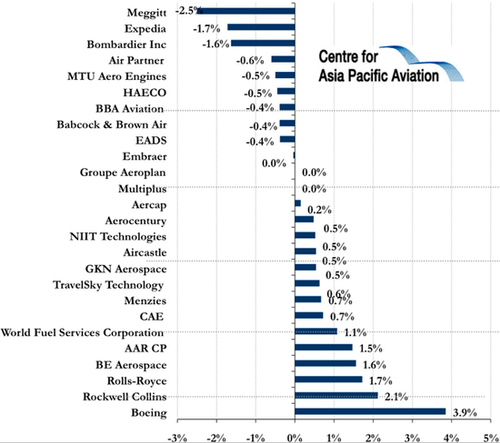