The passenger variant of Boeing’s new Very Large Aircraft (VLA) offering, the B747-8I, took to the skies for the first time on 20-Mar-2011, joining its sister aircraft, the -8F in a lengthy programme of test flights. In this second of a two-part series on VLA programmes, we review latest developments and the outlook for the B747-8.

The B747-8I, the largest aircraft ever produced by Boeing and the longest passenger aircraft now in production, has completed its maiden voyage – a four-and-a-half hour flight from Paine Field to the nearby Boeing Field. The aircraft, powered by four GEnx-2B engines, reached an altitude of 20,000ft (6,096m) and speeds of 250kt (463km/h). 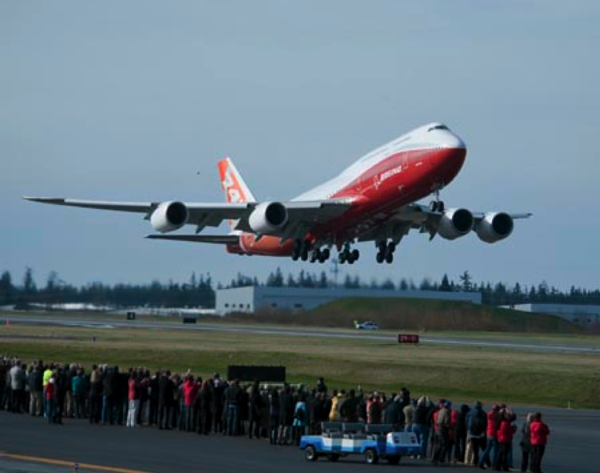 Despite the strong sales of its predecessors, Boeing’s new B747 passenger variant has not sold well, with many of the world’s major growth carriers and large B747-400 operators having instead opted for the Airbus A380, which carries 525 passengers in a three-class layout compared to 467 on the B747-8I. Major industry figures have previously stated that the B747’s major competition, however, is not the A380 but rather the B777-300ER.

Demand for the B777-300ER continue to be strong. Emirates’ Tim Clark and Air Lease Corp’s Steven Udvar-Hazy, two men that can sway strategy in Seattle and Toulouse, have both suggested the B777-300ER cannibalises the B747 market and is responsible for the poor sales of the new product. "The (B777-300)ER has proven to be one of the most popular aircraft ever produced, which is why we bought 100 of them,” Mr Clark says, "what Boeing is up against is not the A380, it is their own machine - the 777-300ER."

Clark points out that Emirates carries up to 427 passengers on its B777-300s. Lufthansa, the launch customer of the B747-8I, recently announced plans to carry just 386 passengers on its new 747s. Mr Udvar-Hazy, Air Lease Corp CEO, stated at the recent ISTAT conference in Arizona that there is “quite a bit of overlap” in the B777-300ER and B747-8I market, noting that many former B747 operators have traded them for B777-300ERs, which is often a better match “capacity-wise”.

The graph below indicates the number of customers and orders for both Airbus and Boeing’s VLA (passenger variant) programmes.

Airbus A380 and Boeing 747-8I (passenger variant) customers and deliveries, by year of programme 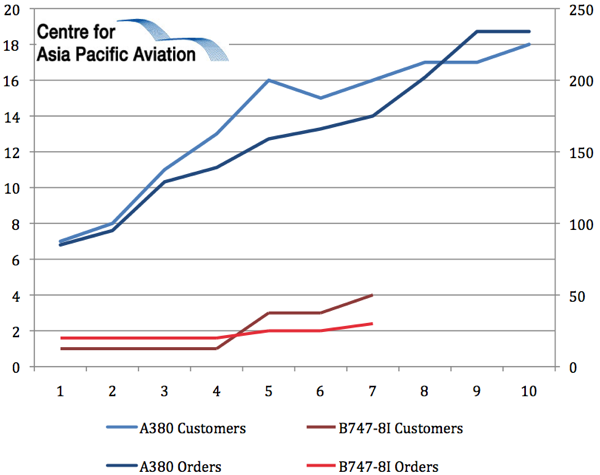 Boeing’s 747-8 programme has found more success in the cargo market, which is not included in the graph. Air Lease Corp’s Udvar Hazy stated recently the B747-8 would be more successful as a freighter than a passenger aircraft, calling it the benchmark freighter for the next 15-20 years, especially since the A380 has forfeited the market.

Boeing - not as bullish on the VLA market

The two major manufacturers make broadly similar predictions on the global air transport market in their respective 20-year forecasts, with slight differences in economic growth forecasts, narrow body and twin-engine expectations and regional demand. One area of major difference, perhaps unsurprisingly in light of investments in different aircraft markets, is the forecast for the VLA market.

Airbus sees much stronger demand in the VLA segment. It forecasts 1,740 aircraft, including 400 VLA freighters (a programme which it has dropped). Boeing, in its most recent 20 year forecast, expects 720 new VLAs by 2029, representing USD220 billion worth of orders. The majority of these deliveries will, according to Boeing, replace the existing VLA fleet of 800 aircraft, and take the VLA fleet in 2029 to 900 aircraft.