Earlier this week, Boeing delivered its 377th 737 for the year – a 737-900ER for United Airlines – making 2012 a record delivery year. United Airlines was Boeing’s second 737 customer – after Lufthansa – placing a mammoth order (by 1965 standards) for 40 aircraft. When the 737s began going out to customers in 1968, it took Boeing almost eight years to deliver 377 aircraft.

Net year-to-date orders for the 737 Next Generation and the new MAX have totalled 1,031 aircraft. This is almost 200 more than the previous single year record of 846 orders set in 2007. As is typical for the airline industry, the ordering peak occurred just prior to the onset of a major dip in global passenger traffic, triggered by the global financial crisis.

Leasing companies also got in on the act: Air Lease Corp ordered 75 737s, GECAS ordered 85, Avolon secured 25 and ALAFCO grabbed 20. All the leasing orders were announced at the Farnborough Air Show in Jul-2012. 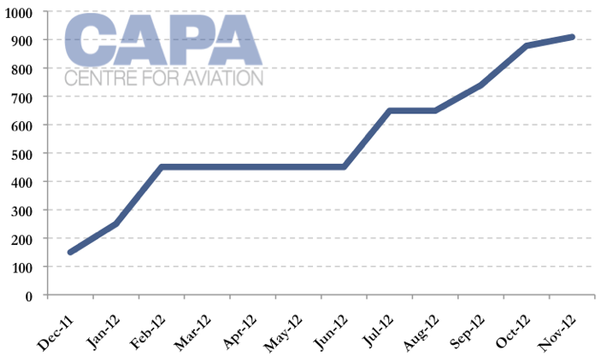 The record orders from Airbus in 2011 and Boeing in 2012 are a reflection of the fact that Boeing was later to market with its re-enginged narrowbody. Airlines understandably were waiting for the manufacturers to make their moves and there were frenzies after each programme was launched as leading operators were keen to secure early delivery slots for the new more efficient aircraft.

Boeing now has over 900 737 MAX orders, but hopes to have 1000 by the end of the year. There are several major narrowbody campaigns that could be wound up be the end of 2012 or early 2013, including a potential Turkish Airlines order for 100 aircraft. 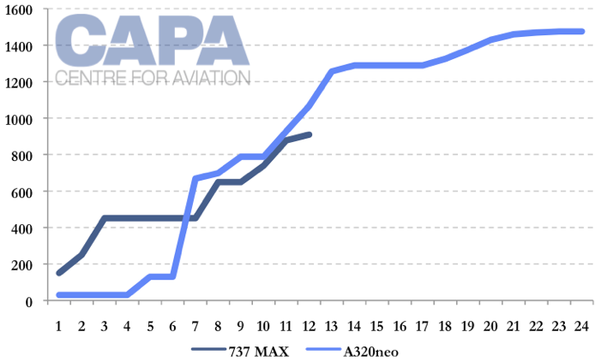 Boeing’s 737 is entering its fifth iteration. Since the aircraft entered service, more than 7400 have been delivered and if Boeing has its way, the aircraft will probably see another 7400 deliveries.