Boeing has issued a profit warning for the first quarter and announced a 29% cut in B777 production rates, citing the "significant deterioration in the business environment for airlines and cargo operators driven by unprecedented global economic conditions".

Boeing will reduce monthly production of the B777 from seven to five from June 2010 and will also delay previous plans to modestly increase B747-8 and B767 production. No change is being made at this time to the B737 production rate, according to Boeing, but the Centre for Asia Pacific Aviation expects this could be revised as well by the end of 2009 as more airlines ground aircraft.

Boeing Commercial Airplanes President and CEO, Scott Carson, stated, "these are extremely difficult economic times for our customers". He added, "it's necessary to adjust our production plans to align supply with these tough market conditions. We are in close contact with our customers as we continue to monitor this dynamic business environment".

Several airlines have announced aircraft delivery deferrals, with Australia's Qantas the latest to announce it is negotiating with Boeing to defer initial deliveries of 15 B787s as it expects a big reduction in profit and further cuts capacity.

Airlines have cancelled orders for 32 of Boeing aircraft this year (all for the B787), while the manufacturer has only 28 firm orders this year.

B747 programme losing money - margin squeeze on other models

Boeing also disclosed its B747 programme is currently in a loss position, and it anticipates reduced earnings will be recorded for most units in the B747 backlog. Other commercial programmes will see lower margins on deliveries as they occur.

The aircraft manufacturer will update its 2009 guidance when it reports first-quarter results on 22-Apr-09. Its shares fell 5.1% yesterday. 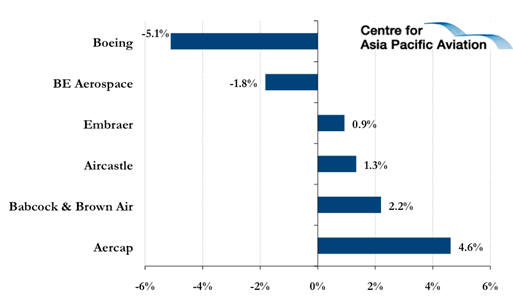