Boeing's shares surged 7.3% on Wednesday, as the aircraft manufacturer reported a better than expected net profit of USD1.27 billion, or USD1.757 per share for the three months ended 31-Dec-2009. Quarterly sales at the manufacturer rose 42%, to USD17.9 billion, reflecting the two-month strike by machinists in late 2008 that halted production.

Boeing Commercial Airplane revenue was USD9.2 billion in the quarter, while it reported profit of USD1 billion, compared with a loss of USD968 million in 4Q2008.

2010 production is expected to be 460-465 aircraft, very similar levels to the 481 aircraft delivered in 2009. The manufacturer has denied reports that it plans to reduce B737 production, but will cut B777 widebody production to seven per month from Jun-2010, as announced last year. Boeing also confirmed that it is looking at a new engine for the B737 to update the type to compete with new entrants into the narrowbody market over the next few years. A target for orders has not been announced.

Boeing will be concentrating on certifying and delivering the B787 and the B747-8F, with both aircraft due to be delivered to their launch customers (All Nippon Airways and Cargolux, respectively) in 4Q2010.

Boeing expects to provide just USD500 million in financing for new aircraft in 2010, after approximately USD800 million went to support new aircraft customers in 2009 (less than the USD1 billion initially forecast by Boeing). Export credit agencies are expected to take another important role in bridging the aircraft financing gap in 2010.

2010 profit is expected to be USD3.70 to USD4.00 per share on revenue of USD64-66 billion. The revenue and profit outlooks are slightly lower than analyst forecasts. Boeing will focus on continuing its “strong operational performance”, repositioning its defence, space and security business, and getting its two new aircraft into service. 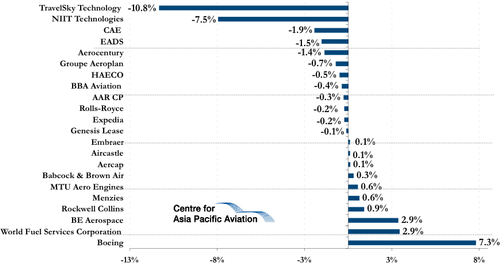