After dropping more than 15% this week on news of yet more problems with its B787 programme, Boeing's shares recovered some ground yesterday, rising 2.7%. However, fallout from the B787 delays may be only just beginning.

Qantas announced plans to cancel 15 B787s that were scheduled for delivery over 2014 and 2015 and defer another 15 aircraft for four. While Qantas has officially linked the decision to its carrier's need to preserve cash amid the economic downturn and not the most recent B787 programme issues, the timing of the announcement is unlikely to help investor confidence.

Meanwhile, shares in Boeing’s major rival EADS (parent of Airbus) fell 1.2% yesterday. CEO, Louis Gallois, reiterated the company’s May forecast of lower EBIT for 2009, although it will remain “clearly positive”.

Airbus’ cash surplus is expected to decline by EUR1.5 billion, partially due to lower levels of customer deposits on Airbus orders. The European manufacturer will also provide approximately EUR1 billion in financing for airlines this year (comparable to 2008 levels).

Gallois also addressed the troubled A400M transport programme, stating it has forced Airbus to set aside EUR2.3 billion in provisions so far. EADS is currently renegotiating terms with seven governments that have ordered the aircraft, warning that the programme "can destabilise EADS, and I think our customers realise this."

Menzies' shares surged 17.9% yesterday, after it released a trading update ahead of the release of its 1H2009 results in August. The Group expects profit for the first six month of the year will be better than the same period last year (when it reported a net profit of GBP4.1 million), and it is also focusing on stringent debt management.

However, the Group's aviation business (mostly ground handling) expects to report a marginally lower first half result, primarily due to the weak cargo market, although it has “performed well” and remains on track to meet full-year expectations. In the last few months Menzies has signed agreements with JetBlue, Lufthansa Cargo, Etihad Airways, Air Berlin, SWISS and V Australia.

Menzies’ distribution segment has performed better than the previous year, due to positive cost reduction initiatives. Overall, the marginally lower contribution from aviation is expected to be more than offset by improved trading in distribution and lower central costs. 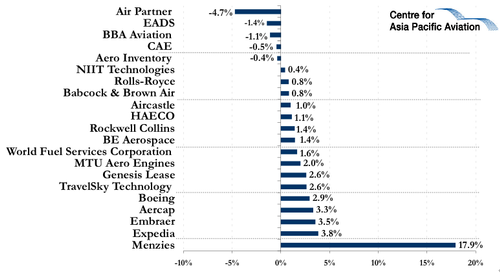