Boeing shares fell 0.8% yesterday, as the manufacturer stated orders for 26 aircraft were cancelled in the past week, with an order reduction covering one B737, 10 B777s and 15 B787s, although no further details were provided. The manufacturer received two new B737 orders, one each for a business jet/VIP customer and unidentified customer.

Media reports have indicated that the B787 order reduction has come from Dubai Aerospace Enterprise, with the company's B787 order reportedly no longer on Boeing's order book. The B787 backlog now stands at 847 jets for 55 customers, a reduction from 116 orders in 2008, with B787 cancellations exceeding new orders so far in 2010. The new B737 orders brings the total net tally for 2010 to 255 aircraft, exceeding the total for 2009.

Boeing shares have declined 32% since the first B787 delay was announced in Oct-2007.

Shares in Embraer rose 0.3% yesterday, with the company’s stock gaining 18% in Sao Paulo trading in the past three-months (outpacing a 5.2% gain in Brazil’s Bovespa Index).

Embraer VP Finance, Luiz Carlos Aguiar, stated the manufacturer expects to have a backlog of more than USD17 billion before the end of 2010, adding the current backlog stands at USD16.2 billion, including 37 firm orders signed at the Farnborough Airshow. Mr Aguiar said: “We’re returning to selling, and our planes are showing they’re competitive."

Before the release of the manufacturer’s second quarter results (on 01-Aug-2010), three banks raised their ratings on the stock, as follows:

Meanwhile, Agora CTVM SA commented that the Farnborough sales would alter Embraer’s cash flow that will lead to changes in the target price for its shares. 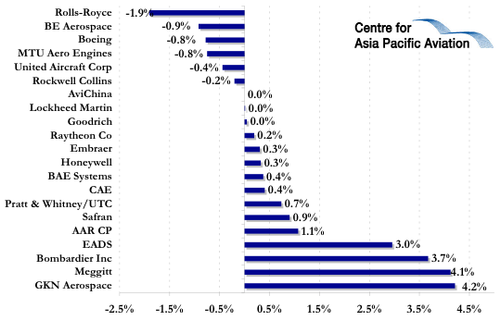 Shares in AerCap gained 0.6% yesterday, coinciding with the release of the company’s financial results for the three and six months ended Jun-2010.  During the three months to Jun-2010, the company reported a 102% increase in revenues, to USD595%, although net profits declined 14% to USD50 million.  The carrier stated it was “pleased” with the results, which beat analyst expectations.

CEO, Klaus Heinemann commented: “AerCap has continued to deliver asset, revenue and net margin growth quarter after quarter while maintaining earnings per share that are consistently at the top end of the range among our listed competitors. AerCap’s solid liquidity is reflected in our total cash position, which now exceeds USD500 million and represents one third of our current market capitalisation." 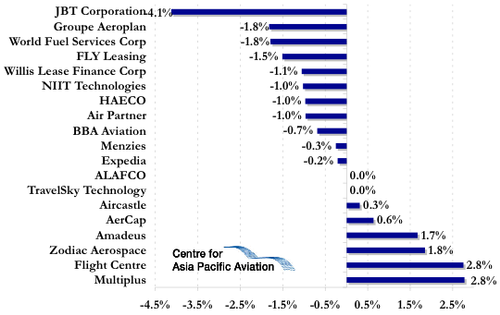