Boeing rules out acquisition of Alenia; Bombardier and Embraer up

Boeing has stated it is not likely acquire Alenia Aeronautica, one of the main suppliers for the B787 and a source of problems for the programme. Boeing CFO, Jamie Bell, stated that the company “clearly is struggling”, but acquiring the supplier was not the way to solve its problems.

In 2009, Boeing revealed that rear fuselage parts supplied by Alenia had wrinkling of the composite skin. Just 12 months later, “workmanship issues” with the Alenia manufacturer's horizontal stabiliser were announced.

Boeing’s diffused approach to B787 manufacturing, outsourcing most of the manufacturing to a global network of suppliers, has been a headache for the company. Outsourcing by Tier 1 suppliers to smaller firms has created problems with parts shortages and quality control, resulting in more slowdowns in the programme. As late as Apr-2010, some supplier partners were still incorporating engineering changes.

Boeing is not wholly opposed to acquiring suppliers when it suits. Over the past 18 months, the company has purchased Vought and Global Aeronautica (a JV between Alenia Aeronautica and Boeing), settling supply chain issues and also establishing the foundations of the second B787 assembly line in South Carolina.

Boeing stated in Apr-2010 that it has made progress in “stabilising the supply chain”, although active management of suppliers would be necessary to ensure the long-term health of the B787 programme. Boeing aims to increase production from around 2.5 aircraft per month to 10 airframes per month by 2013.

Elsewhere, Embraer shares surged to a two-week high, gaining 6.1% yesterday. The Brazilian Defence Minister stated that Colombia may acquire the company’s new KC-390 military transport. An MoU on the aircraft was due to be signed yesterday. The cargo aircraft is the largest the company has ever manufactured, and competes with other transport aircraft such as the C-130 and EADS’ new A400M.

Meanwhile, Bombardier gained 3.6% as it reported its results for 2QFY2011. The company reported revenue of USD4.1 billion and net income of USD148 million, down more than 25%. The company expects aircraft ordering and manufacturing to pick up in the second half of its fiscal year. 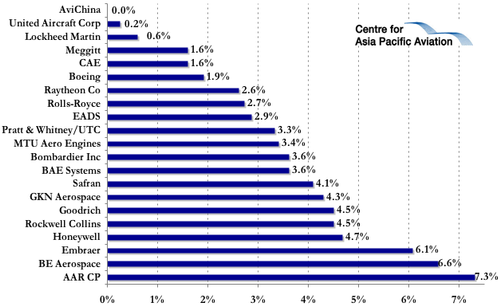 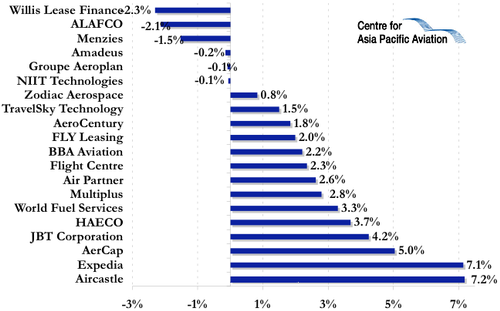