The next two years could be thin ones for aircraft manufacturers, according to EADS CEO, Louis Gallois. With the global financial crisis eating into passenger traffic and, just as importantly, airline balance sheets and credit markets, new aircraft orders could be few and far between in 2010 and 2011, even if the global economy returns to health.

The head of the European aerospace concern stated that while the market for new aircraft is not dead, it is yet to recover and is certainly nothing near that seen over the past two to three years of record ordering. Airbus has taken 140 new orders this year (and 22 cancellations), while its main rival Boeing has taken 150 orders, but has suffered 89 cancellations, dragging its net orders to just 61.

Airbus expects to receive a total of 300 orders in 2009, less than half the amount received in 2008 and approximately a fifth of those in 2007, its busiest year on record. Against this, the manufacturer expects deliveries to slightly exceed last year’s 483 (another record year), although Airbus has already announced plans to freeze or reduce production rates for its aircraft later in the year.

According to Gallois, at the beginning of the crisis, carriers were reluctant to change their planning, preserving orders but adapting to the conditions by retiming delivery schedules. However, as the crisis has lengthened, and cash reserves are stripped away by losses, carriers have less opportunity to order, as they are “increasingly short of money”. The result is that orders in 2010 and 2011 may be few and far between, although planning beyond the first few months of 2010 remains difficult, due to the uncertain impact of the global economic meltdown.

In the meantime, Airbus has more than 3,500 still on order, enough to keep it going for more than seven years at current production rates.

Mr Carson’s departure is tied to the resetting of the schedule for the B787. Boeing’s announcement of Mr Albaugh’s appointment stressed his "extensive experience in development programs and manufacturing”. According to Mr Carson, the new schedule will provide a clear path forward for Boeing and the B787.

The new schedule for the B787 will also throw up a challenge for Mr Albaugh very early in his new position: the B787 is due to fly for the first time before the end of the year and first deliveries are due in the final quarter of 2010. 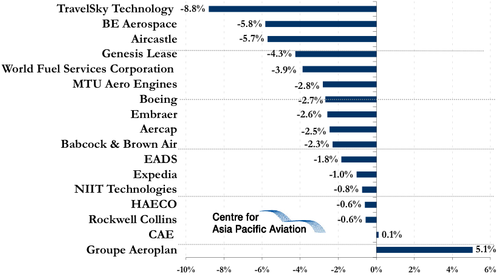