Boeing passes critical test for B787, but the "proof will come when deliveries start" - Qatar Air

Boeing successfully conducted a critical test for the B787 certification programme on the weekend, with the aircraft’s wing pushed to 150% of ultimate load expected in service for approximately three seconds. Boeing stated several weeks of analysis and review are required to confirm the test was a success, but initial results are "positive", according to Randy Tinseth, VP Marketing for Boeing Commercial Airplanes.

There will be a lot of relieved engineers and managers at Boeing, and B787 customers. See Mr Tinseth's blog.

In 2009, the B787 wing failed a test that pushed it to 100% of ultimate load, delaying the initial test flight by six months. In Nov-2009, Boeing pushed the wing to 105% to validate the side-of-body fixes it was forced to make to get the aircraft into the test phase. Airbus suffered a hitch with the A380 test programme when its wing broke in static testing at approximately 145% of ultimate load.

The B787 is now several months into its flight programme, with a fourth aircraft added to the programme in mid-Mar-2010. Boeing’s new aircraft is ticking all the appropriate boxes in testing, having passed flutter and ground effect testing this month, and B787 customers are recapturing some of their earlier enthusiasm for the aircraft, before the delays set in.

Akbar Al Baker, CEO of Qatar Airways, told Reuters late last week that Boeing “have got their act together” with the B787, but warned that the “proof is in the pudding - they have to deliver the first airplane".

The first B787s will be heavier than originally expected, although Boeing has already taken steps to bring the weight down of later production aircraft. There are at least ten carriers that are due to take deliveries of B787s in late 2010 and through 2011, with LAN Airlines last week accelerating its initial deliveries from 2014 to 1Q2011.

Boeing Commercial Airplans CEO, Jim Aubagh, confirmed last week that B787 production will be raised from two to 2.5 per month in Aug-2014.

Boeing’s shares were up 0.1% on Friday, while EADS, parent of Airbus, gained 0.4%. Embraer was up 0.6%. AAR Corp rose 5% on Friday, on news that it has finalised the acquisition of Aviation Worldwide services, which provides MRO and modifications for fixed and rotary wing aircraft used by the US military and Department of State. 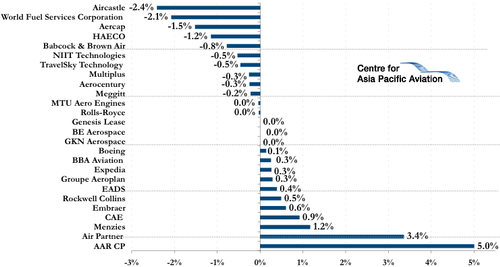