Major aircraft manufacturers continue to produce aircraft at near record rates, but the disquiet expressed by suppliers in late 2009 and earlier this year appears to have all but evaporated. This comes despite the IMF recently warning that significant downside risks are emerging in the global economic recovery (particularly in the developed economies) and narrowly downgrading its GDP forecast for 2011 to 4.25% (2010: 4.5%)

Boeing and Embraer published their first half deliveries this week. Boeing’s commercial aircraft output for 1H2010 was 222 aircraft, moderately slower than anticipated but still within guidelines. Boeing’s Commercial Airplanes' unit has maintained its full year 2010 delivery guidance of 460-465 aircraft, compared to the 498 aircraft it delivered in 2009 and 483 in 2008.

At the same time, Boeing has revealed another strong order win, this time for 43 B737s from an ‘unidentified customer’, as well as one B737 from Virgin Blue. The B737 has remained the trump card in Boeing’s portfolio over the economic downturn: the type continues to receive steady orders and has not suffered from the cancellation issues that have plagued some of Boeing’s widebodies. B737s made up 181 of the 222 aircraft delivered in 1H2010, and 138 of the 177 (net) orders through to 06-Jul-2010.

With a list price of USD3.6-USD8.1 million, compared to the USD35-USD51 million list price for regional jets, the switch has hurt Embraer’s bottom line. As of 30-Jun-2010, Embraer’s firm order backlog totaled USD15.2 billion, representing a 5% reduction from US16.0 billion of the previous quarter end. Embraer has 232 aircraft in its commercial aircraft backlog.

Meanwhile, AAR Corp shares surged after receiving a military airlift contract from the US Transportation Command. 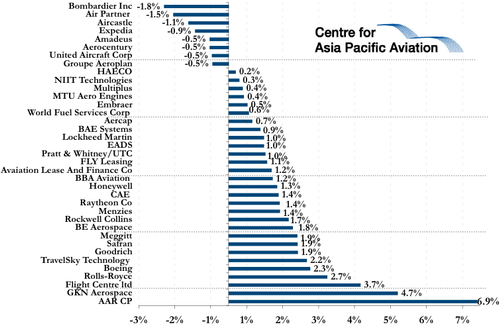