Boeing and EADS down on April orders, lessors up on good first quarter results – Share Wrap

Boeing revealed the loss of 26 more orders yesterday (including 25 for its new B787), sending its shares down 1.5%. For the year to 05-May-09, the manufacturer has received 58 orders and 59 cancellations (including 57 cancellations for B787s) for a net order book this year of -1.

Shares in EADS, parent of Airbus, tumbled 4.6%, despite the manufacturer staying ahead of rival Boeing in the orders race this year. The European airframer has taken 30 new orders for the year to 30-Apr-09, but also received 19 cancellations, mostly for narrowbody A320s, for a net positive result of 11 aircraft. Earlier in the week, it dropped production rates for its A380 this year and next, a move which had already been anticipated by the market, and also confirmed plans to reduce A320 production rates from 36 to 34 per month from Oct-2009.

Turning to the lessors, Aercap continues its steady upward climb, reporting an 8.2% increase in its share price on 07-May-09. The leasing company reported 1Q09 net income of USD30.0 million, compared to USD50.9 million for the same period in 2008, as total revenue fell 29% year-on-year, to USD208.5 million. According to CEO, Klaus Heinemann, the first quarter was the “most challenging environment the company has encountered since the post 9/11 recession and the impact of the SARS epidemic early this decade”. The CEO is optimistic about the outlook, stating the Aercap was "confident" in renewed aircraft trading activity during the remaining quarters of 2009, based on existing contracts and ongoing sales activities.

Aircraft MRO specialist HAECO reported a 10.3% surge in its share price ahead of the release of its 1Q09 financial results today (08-May-09). 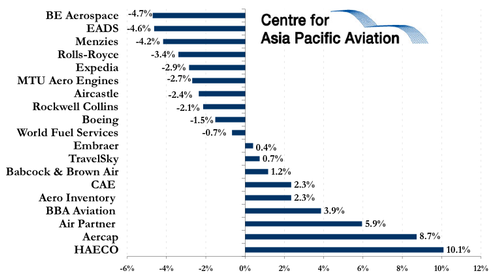