Over the past few years, Airbus and Boeing have delivered aircraft at a relentless pace, hardly pausing output despite their problems with various major aircraft programmes and the cumulative impact of the global financial crisis on commercial aviation. 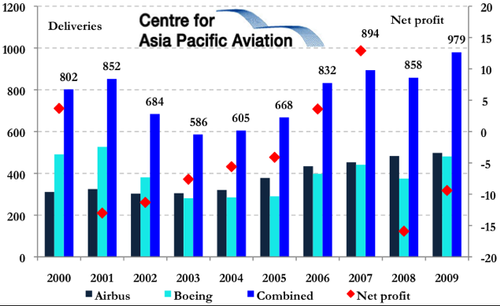 Deliveries in 2009 edged close to the 1,000 aircraft milestone, with a record 979 aircraft delivered between the two manufacturers. Deliveries have been increasing steadily for the most of the past decade, although the dip in 2008 deliveries was due a two-and-a-half month machinists strike at Boeing, upsetting production in the final quarter of that year.

Confident in their order backlogs and the economic recovery, both Airbus and Boeing have now announced plans to increase aircraft output from 2011, perhaps the strongest sign yet that the airline industry (particularly in emerging markets) is gathering strength again, as are the industries attached to it. The 1,000 aircraft delivery barrier looks set to be reached.

Airbus plans to raise output of the narrowbody A320 family from the current rate of 34 to 36 aircraft, starting in Dec-2010. The production rate for the widebody A330/A340 family aircraft will remain at eight aircraft per month. The manufacturer has not announced its intentions for the A380, given the ongoing production issues with the aircraft, but it previously targeted almost doubling output to 20 aircraft this year (although this is well down on original estimates).

Boeing announced at the end of last week that it would accelerate planned rate increases on both the B777 and B747 programmes. B777 production will be raised from five to seven aircraft per month, and the timetable for the production increase has been brought forward from “early 2012” to “mid-2011”.

Similarly, the B747 production rate increase will be accelerated from mid-2013 to mid-2012, with output raised from 1.5 to 2 aircraft per month.

Boeing is still weighing a decision on whether to increase B737 narrowbody output as well, although there are issues here, including the re-engine dilemma faced by Boeing and Airbus for their current narrowbodies, as well as the emerging competition in the form of the CSeries and other programmes.

Airbus Executive VP, Tom Williams, stated “now it is definitely time to think ahead”, as the manufacturer has been able manage its order book and keep production rates stable during the downturn. The A320 production rise is a “prudent decision” to be “ready when the market recovers”, according to Mr Williams. Airbus aims to deliver a similar level of aircraft in 2010 to the 498 it delivered in 2009.

Boeing made its decision to "support increasing customer demand in the recovering airplane market”. VP Marketing, Randy Tinseth, stated that the manufacturer sees 2010 as the "year of overall economic recovery within the industry and 2011 a year where airlines return to profitability”. Boeing anticipates a recovery in orders from 2012 and beyond. Boeing expects to deliver 460-465 aircraft this year.

However, smaller manufacturers are not exercising the output increases at Airbus and Boeing. None have expressed the same confidence in the market recovery for their smaller aircraft programmes, and do not enjoy the same luxury of a 6-7 year order backlog that the larger manufacturers possess.

Embraer plans to reduce output again in 2010, to just 90 commercial aircraft deliveries. This is down from 162 it delivered in 2008 and 122 last year. During 2009, Embraer’s order backlog dropped by USD4.3 billion. Fellow regional aircraft manufacturer, Bombardier, announced in Feb-2010 that it is cutting output by 20% in FY2010/2011, to around 95 aircraft, due to continued uncertainty about the strength of the economic recovery. 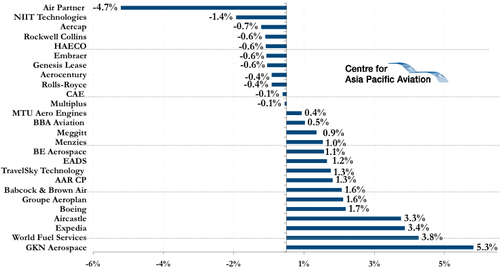