BOC Aviation is 100% owned by the Bank of China, which took over SALE in 2006 for just under USD1 billion. The company’s total assets under management are now USD5.8 billion, a 61% increase from the end of 2008, as the leasing company adopted a “counter-cyclical strategy” and expanded its fleet from 94 to 142 aircraft by the end of the year. 17 aircraft were taken on delivery from manufacturers, while another 31 aircraft were taken onto BOC Aviation’s books through long-term purchase and leaseback agreements from airlines including Southwest, Alaska, Air France, and Cathay Pacific.

Of the aircraft in the portfolio, 118 are owned and the remaining 24 are managed on behalf of third party investors. The company has 49 aircraft on firm order and four on committed purchase and leasebacks for delivery through to 2013.

During the year, Bank of China pumped an additional USD100 million in equity into the company. With the USD137 million profit, BOC Aviation increased total shareholder funds to USD960 million, an increase of one third over last year. The company raised USD4.4 billion in debt in two tranches during the year - quite an achievement in a difficult environment.

According to the Managing Director & CEO, Robert Martin, 2009 was a year of successful strategy execution and the company is now well positioned for the upturn in the cycle as the aviation business recovers. The CEO described 2009 as a “breakout period”, in an interview with the Singapore Business Times.

Elsewhere in the aircraft leasing industry, Genesis Lease and AerCap have finally announced the imminent closure of their merger deal. Genesis Lease shareholders approved the merger with AerCap on 23-Mar-2010, with 97% voting in favour. The agreement is expected to close today (25-Mar-2010), operating under the AerCap name. The company will be one of the largest leasing companies following the closure of the deal, with a portfolio of approximately 360 aircraft.

Also in the leasing industry, CIT Aerospace President, Jeffrey Knittel, confirmed the company is going to retain its aircraft leasing unit as a “core piece of CIT for the future”. Its portfolio of approximately USD6.5 billion in owned and managed aircraft is reportedly the best performing asset of CIT’s transportation finance and leasing segment. 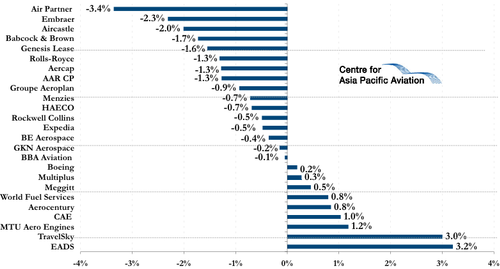