SAS subsidiary Blue1 will undergo network changes that will see it drop its non-Scandianvan European routes in order to bolster services from secondary Finnish cities.

This will allow the SAS group to build greater feed into its Copenhagen Kastrup and Stockholm Arlanda hubs, a competitive move against Finnair and its Helsinki hub, as well as LCC Norwegian Air Shuttle and its Scandinavian hubs.

This development is only the first in what will be a number of changes across the group’s carriers up to 2015 under the new strategy as SAS seeks to become a more formidable force. Meanwhile low-cost carrier Norwegian Air Services continues to grow and threaten SAS’ dominance in the Nordic market.

Finnish subsidiary Blue1 faces the first main changes to the SAS Group within the ‘4Excellence’ strategy, SAS' business plan through 2015. The recent announcement of changes to Blue1’s network is the largest change since it was acquired by SAS and subsequently adopted the Blue1 branding in 2004. A number of Blue1's continental European services will be ceased. Currently Blue1 serves Brussels and Zurich year-round with additional seasonal destinations to points including in Croatia and France. Brussels and Zurich will be discontinued in all seasons while summer destinations have so far not been entirely cancelled.

Blue1 offers 2990 return weekly seats across 13 flights to each Brussels and Zurich. These are Blue1's third and fourth largest international routes by seat capacity but largest routes by available seat kilometres. 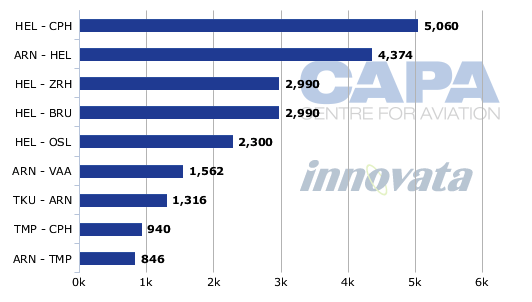 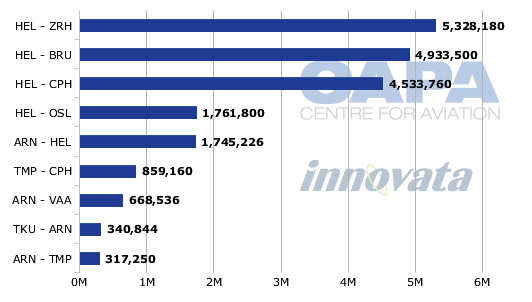 Key competitor Finnair also serves the Helsinki-Brussles and Zurich routes, deploying approximately twice the amount of Blue1's capacity to Brussels and 20-40% more capacity to Zurich than Blue1. Blue1 codeshares with fellow Star Alliance carrier to Frankfurt and Munich and with LOT to Warsaw. Despite Brussels and Zurich being Star hubs for Brussels Airlines and Swiss, neither carrier has routes to Helsinki, although they codeshare with Blue1. Swiss previously served the city but suspended operations. Neither carrier has announced if the reduced competition, which gives Finnair a monopoly, will provide incentive to enter the markets.

Given the relatively large capacity Blue1 devotes to continental Europe, removing these services will allow Blue1 to place a concentrated focus on intra-Nordic services, feeding passengers from Finland into SAS’ key hubs at Copenhagen and Stockholm. Currently Blue1 operates to Copenhagen from Helsinki and Tampere but operates a larger network into Stockholm with five services. 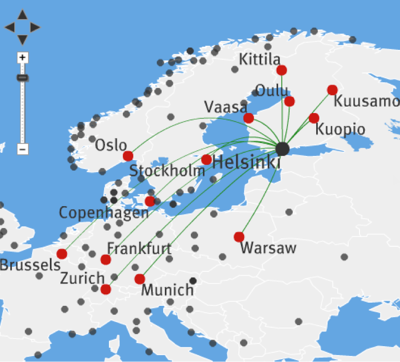 SAS has so far stated routes from Copenhagen to the Finnish cities of Kittilä, Kuopio, Lappeenranta, Oulu, Turku and Vaasa are being planned as well as from Stockholm to Kokkola, Oulu and Pori. Out of the new Copenhagen services, only direct services to Turku are presently operated with SAS operating Copenhagen-Turku 12 times weekly, offering 1278 seats on the route. It is unclear if SAS will withdraw completely from the route when Blue1 commences service between the city pairs, but it is a potential outcome. The announced Stockholm services are also completely new.

Travellers on these city pairs, (with the exception of Copenhagen-Turku) are presently required to make one-stop journeys (generally via Helsinki) to reach these Finnish destinations. The proposed new links will no longer require such journeys, which will aid Blue1’s success for service to Copenhagen and Stockholm. More important is the contribution in opening these secondary Finnish cities to SAS' wider European and international network, providing an alternative to Finnair and its Helsinki hub.

With Blue1 moving to become a stronger Finnish network operator within the Nordic region, and already operating key ‘capital’ links between Denmark, Sweden and Finland (Copenhagen-Helsinki, Stockholm-Helsinki), SAS may potentially withdraw some of its own Finnish services, either through decreasing frequency or leaving them to Blue1 to operate altogether. SAS withdrawing from Finland would free further resources, both staff and aircraft to operate to other Nordic or European destinations.

The network changes come following the carrier’s fleet rationalisation programme with the phasing out its Avro RJ-85 fleet in Sep-2011, replacing them with more modern Boeing 717-200 equipment. The carrier now operates a total of 14 aircraft including ATR 72-500, Boeing 717-200, and SAAB 2000 equipment. The fleet rationalisation allows for less fuel-efficient and maintenance-heavy aircraft to be removed from the group’s fleet, increasing potential aircraft utilisation rates and decreased maintenance expenses.

Scandinavian Airline is facing increasing competition from low-cost carriers at its Copenhagen Kastrup, Stockholm Arlanda and Oslo hubs, particularly from Norwegian Air Shuttle. At Copenhagen, SAS holds a 31.1% market share while Norwegian holds 15.4%. Stockholm shows a closer share between SAS and Norwegian with 29.4% and 23.2% respectively. Oslo Airport is a different story with Scandinavian the second most dominant carrier behind Norwegian with 33.7% system capacity share compared to Norwegian’s 42.5%.

At Oslo Scandinavian competes directly with Norwegian, both domestically and internationally.

Main competitor Norwegian Air Shuttle currently operates 63 Boeing 737-300 and -800 equipment, with a further 55 737-800 scheduled to arrive through 2018. While some of the 55 737s will be for replacement of older aircraft, the airline will still be expanding greatly within the Nordic region and beyond.

The airline plans to commence long-haul services from early-2013 using 787 equipment, of which it has six on order. This move into what is primarily SAS territory will require a strong response from SAS, underscoring its need to be more competitive on a unit cost basis and retain its corporate share. The airline’s ‘4Excellence’ strategy will see the carrier attempting to curb Norwegian’s growth of its share of the leisure market, assisted through its subsidiaries as well as a more aggressive stance from Scandinavian Airlines itself. 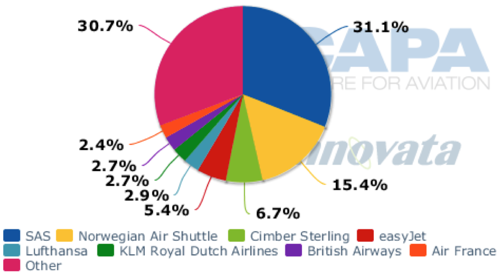 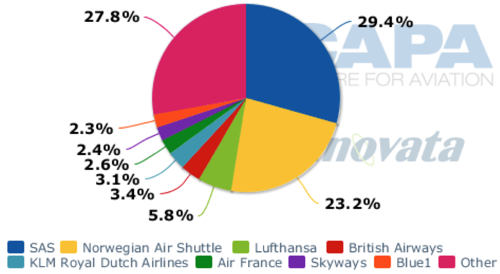 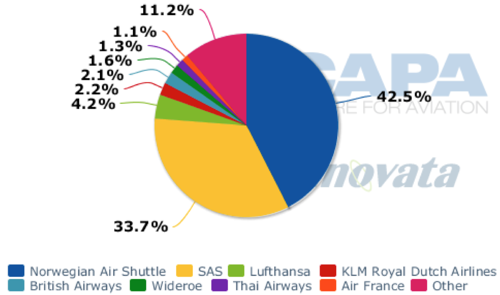 Changes for Widerøe ahead?

With the increasing expansion and dominance of Norwegian Air Shuttle, Widerøe, SAS’ Norwegian equivalent of Blue1, may become a more important component in SAS’ regional strategy. Widerøe operates extensive domestic services within Norway as well as some short-haul international services to the UK. A large portion of Widerøe’s operations are described as ‘public service obligations’ (PSO) services under which the carrier receives government funding to operate particular routes.

Widerøe could potentially follow Blue1’s lead with the elimination of European services and increasing focus on intra-Scandinavian services, specifically linking regional Norwegian cities to SAS' hubs at Copenhagen and Stockholm. The main factor which may prevent this occurring is the fact the majority of the carrier’s operations into the Norwegian capital, Oslo, are into the secondary airport of Oslo Sandefjord rather than Oslo Gardermoen which is SAS’s main Norwegian gateway.

The redesign of Blue1’s network into a supportive feeding network from Finland into Copenhagen Kastrup and Stockholm Arlanda is only the beginning of the SAS Group’s evolution into a stronger Nordic based short and long-haul network carrier under the ‘4Excellence’ strategic direction. Subsidiaries Blue1 and Widerøe will be utilised to strengthen the group’s dominance within Finland and Norway, particularly in the leisure markets, through providing effective domestic, regional and international feeder links to key Scandinavian hubs.

Scandinavian Airlines (SAS) launched ‘4Excellence’, the successor to its ‘Core SAS’ strategy in mid-2011 and has since begun to make changes across the four central areas of Commercial Excellence, Sales Excellence, Operational Excellence, and People Excellence. With this strategy, set to continue until 2015, the carrier is focussing on remaining the preferred choice for business passengers while strengthening its position in the leisure segments from the Nordic region, which it has lost to Norwegian.

Core SAS achieved a SEK7.6 billion (USD1.1 billion) cost reduction from 2008 to 2011, which allowed SAS to reduce its unit costs 23% since 2008. Core SAS focused on the premium and corporate markets. The programme also saw SAS achieve its highest level of customer satisfaction in 11 years and positioned itself as the most punctual airline in Europe since 2009.

Within the 4Excellence strategy, SAS aims to become the leading airline in the Nordic region through high levels of customer and employee satisfaction, achieving sustainable profitability and reducing unit costs by 3-5% annually while also reducing total carbon dioxide emissions by 20%. This will be achieved through further cost-saving measures and productivity improvements that will be led by the implementation of the Lean quality and efficiency programme. Improvements to the airline’s frequent flyer programme, EuroBonus, are also expected.