The UN Executive Secretary of the Framework Convention on Climate Change, Christiana Figueres, this week urged aviation to become a symbol of pro-active action to address climate change. At the heart of many efforts to reduce aviation’s environmental impact and drastically cut its CO2 footprint is the development of sustainable aviation biofuels.

IATA is targeting neutral CO2 growth for aviation from 2020 and a 50% reduction in emissions compared with 1990 levels by 2050. Included in this effort is a projected 1.5% increase in fuel efficiency, driven by better airframes, engines and air traffic management techniques and airspace usage. Biofueis, which hold the promise of a carbon-neutral aviation fuel, will also play a major role in IATA’s green target.

Emissions from biofuel are only fractionally lower than those of traditional fossil fuels’, but plant and algae feedstocks fix CO2 as they grow, offsetting what will be emitted when they are burned. Testing by commercial airlines has already been conducted with 50:50 "drop-in" mixtures of biofuel and traditional aviation kerosene, proving that drop-in fuels can be used without making any modifications to the aircraft or the fuel infrastructure, such as pumps, storage or pipelines. The target is to fully certify aviation biofuels by 2013, although there is a possibility that drop-in biofuel blends could be certified before the end of 2011.

Airlines and the aviation industry are taking the move to biofuels seriously. In 2008, the Sustainable Aviation Fuel Users Group (SAFUG) was formed to accelerate the development and commercialisation of sustainable aviation fuels. The Brazilian Alliance for Aviation Biofuels (ABPPM) was formed in 2009, initially with 10 members.

Virgin Atlantic, Air New Zealand, Japan Airlines, Qatar Airways, Continental Airlines, United Airlines and Air France-KLM have all successfully tested biofuels and alternative fuels and more airlines are set to join them in 2011. SAFUG has 20 airline members, while there are now five carriers involved in ABPPM.

The major problem for aviation biofuels revolves around commercialisation and the investment required for large-scale production and the cost of the fuel itself, which is still well above fossil fuels. Airbus and Boeing, self-designated catalysts of the push towards sustainable biofuels, project that the "tipping point" for aviation biofuel use to become commercially viable is around 1% of total fuel use. This target could be achieved as early as 2015, with Airbus projecting that by 2030, 30% of aviation fuel could come from biofuels.

As more biofuel feedstocks are developed and production expands, commercially produced biofuels are expected to eventually match the costs of fossil fuels. The inexorable rise in the price of oil (projected to average more than USD82 per barrel next year) will also help address the price gap.

This week, Airbus, British Airways and Cranfield University jointly launched (16-Sep-2010) the Sustainable Use of Renewable Fuels (SURF) programme, aimed at solving the problem of how to harvest algae to produce jet fuel in commercial quantities. Rolls-Royce, Finnair, Gatwick Airport and IATA are also involved in the programme. The eventual aim is for Cranfield’s Sea Green to be an ocean-based facility for the sustainable production of commercial quantities of biomass for biofuels.

British Airways is heavily involved in the push to alternative fuel sources. This year the carrier signed an agreement with Solena Group to establish a European sustainable jet fuel plant derived from waste biomass to power the BA fleet operating from London City Airport. While the small scale (16 million gallons p/a) is not full commercialisation, British Airways calculates the plant could save GBP36 million in landfill costs by utilising 500,000 tonnes of biomass feedstock per year

Already active in Europe are the French-driven CALIN and CAER projects, and the EU-wide ALFA-BIRD (Alternative Fuels and Biofuels for Aircraft Development) R&D programme and SWAFEA, the European Commission's Directorate General for Transport and Energy incentive to investigate the feasibility and the impact of the use of alternative fuels in aviation. Russia’s state-owned Russian Technologies announced it will begin construction of the country's first biofuel facility in early 2011.

In Asia, Thailand’s PTT Aromatics and Refinery announced plans this month to invest USD150 million to develop aviation biofuel and biodiesel products and production facilities. The move is driven by the need to meet the inclusion of aviation into the European Emission Trading Scheme, which will take effect in 2012. If the company goes ahead with the plan, large-scale production could commence by early to mid 2012.

Honeywell UOP also announced this month that its is ready to move into commercial-scale production of aviation biofuels. The company has started the certification and licensing processes and it could commence production within the next two or three years. Honeywell expects fossil fuel and biofuel costs will eventually be comparable.

Fuel stays above USD75 per barrel

Crude oil prices ended the week to 14-Sep-2010 at USD76.78 per barrel, gaining 3.8% over the week. Crude oil prices are now 7.7% above where they were 12 months ago, although the crack spread between crude prices and jet fuel prices continues to widen as refineries wind down capacity. 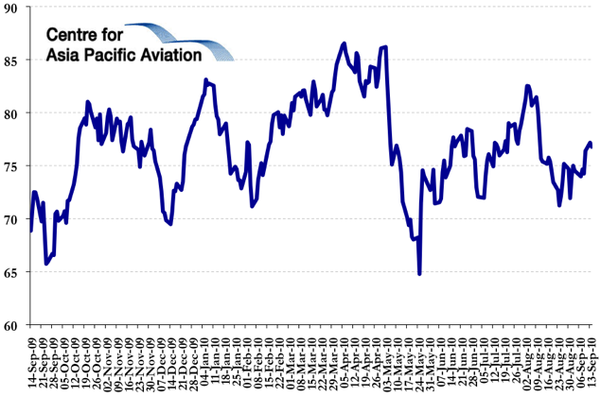 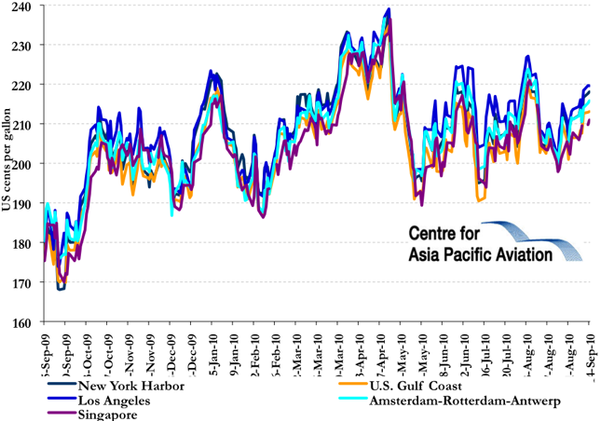