On the same day the airport announced (04-Nov-2010) that a class meeting of holders of H Shares will be held on 21-Dec-2010. A special resolution was announced that: "Conditional upon the approval of the same by the Shareholders at the EGM to be or has been convened, the offering of 1,322,751,000 domestic shares by the Company to Capital Airports Holding Company be and is hereby approved.”

France's Aéroports de Paris (-0.7%) launched (02-Nov-2010) a significant renovation programme of its covered car parks. By 2011, most covered car parks at Paris-Charles de Gaulle and Paris-Orly will have been fully renovated with nearly EUR750 million to be invested in the project between 2009 and 2015. The airport has also signed a contract with Radio Classique to offer music in the covered car parks of both airports. 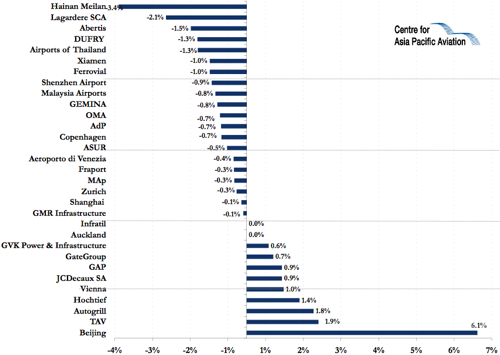