A site for the second Beijing airport has finally been agreed. The new airport will reportedly be developed at Daxing District in the city's south. Negotiations over the site have been ongoing for much of this decade. But as traffic at the capital recovers strongly this year, officials have determined now is the time to start developing a new facility, to avoid a repeat of last year’s capacity constraints.

Construction will commence in 2010 and be completed in 2015 when the current three terminal airport reaches saturation. The plan requires the approval of the State Council.

Shares in Beijing Capital International Airport’s listed operator surged 9.2% yesterday, as China Southern Airlines, which has a base at the capital, revealed a cautiously optimistic outlook for 2009 after heavy losses in 2008.

Elsewhere, Copenhagen Airport and its parent, Macquarie Airports, rose 6.9% and 6.2%, respectively. Hochtief rose 3.9% (its highest close since 07-Jan-09) as the company confirmed its 2009 earnings forecast. 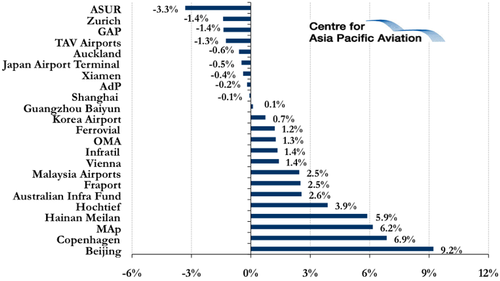