After falling 5.3% on Tuesday, BE Aerospace's shares rallied 5.7% yesterday, to close at USD15.37. The aircraft interiors and component manufacturer’s 1H2009 results were strongly affected by cost cutting measures by customers, with revenue dropping 23.2% and operating profit down 22.6%.

Airlines, business carriers, MRO organisations and aerospace manufacturers all conducted inventory destocking over late 2008 and 2009, pushing back retrofit programmes and deferring aircraft refurbishments. Near-term prospects for major new-buy or retrofit programmes are now apparently at “trough levels”, according to BE Aerospace.

BE Aerospace expects the demand for aircraft components to increase as cost cutting airlines begin to reach the end of their inventories and purchase more parts. The company is now focusing more than half of its business on consumables and spares demand, in anticipation of improving demand during 2010.

Revenues are forecast to be approximately 5% lower in 2010 than in 2009, primarily due to the lower level of bookings recorded this year. While its current USD2.75 billion order backlog is expected to shrink during 2009, the company forecasts an expansion in orders and backlog beginning in 2010.

Meanwhile, Rolls-Royce's shares fell 1.6% in trading yesterday, to 367.75 pence, after the company announced GBP300 million in new investments and R&D programmes, with GBP45 million to be supplied by the UK Government.

Boeing traded up 0.3%, announcing several new B777 orders over the last few days, including five from Ethiopian Airlines and seven from Turkish Airlines. Ethiopian Airlines also signed an MoU for 12 A350s with Airbus. Shares in Airbus' parent, EADS, were up 1.8% yesterday. 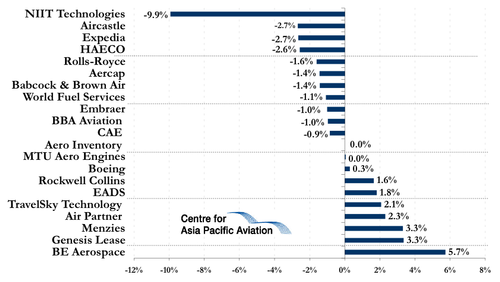